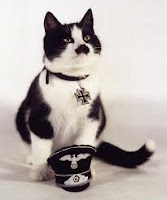 Now thanks to the Guardian we know the truth. The latest leaks show that the illegal war launched by the war criminal Neville Chamberlain did not simply aim at the defence of Poland but at regime change, here in Germany!

As if that were not enough it has now emerged that the assassination plot that mercifully failed yesterday took place after covert contacts with sinister forces in the Western alliance. As early as 1938 secret talks took place between the German military elite and the arch-imperialist, oppressor of India the so-called Lord Halifax about the overthrow of the legitimately elected(ish) Government of the Democratic Third Reich.

After all, who elected Stauffenberg? Who did he and his fellow plotters represent? The only mandate given them was the one emanating from the US-led world order that has always conspired against our people and sided with our oppressors.

You couldn't make it up if you tried. Pass the piano wire Alice.

A Cademic
University of Penge

Indeed, Aldoph nails these warmongers. Here's to your brave resistance against the imperialists.

Objectively it is clear that genocide is a perfectly reasonable response to the problems of the German State. After all, who would not want to systematically murder six million people if their country had been forced to sign the Treaty of Versailles twenty years previously?

Overstated? Not by that much.
Posted by The Plump at 4:36 pm

I saw one guy ranting on a forum I frequent that until the Soviet Union entered the war it was merely two imperialist aggressors slugging it out.

I wish I didnt feel that The Graun had betrayed me personally. How can I shun them? where do i read instead?
While we are already agitated,
here is a link to a horrifying account of Bliar and his best pal Momar QuGadaffyduck - by David Rose in Vanity Fair worth the clickthrough.

I have lost track of who wrote the post, but the author has caught the irony of a Peter Simple column to perfecton. For a liberal left blog, that's not half bad.

Left and right, unite and fight!

Of course the Soviet Union didn't really enter the war. It was dragged in.