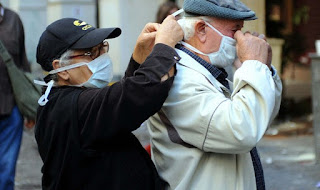 It is one of my catchphrases. Since my early retirement I keep telling people in a quavering voice, "I'm a pensioner, y' know". Being a pensioner isn't quite the same as sinking back into senility, gazing at a blank TV screen. It can be rather active; somewhat more active and less lucrative if you are a Greek pensioner. There was more disturbing violence in Athens yesterday as the crisis drags on, with Eurozone leaders paralysed through disagreement, whilst the anger on the streets at yet more austerity measures continues and the increasing anxieties about the seriousness of the situation spread throughout governments and financial institutions alike. Martin Wolf makes the most pertinent point in the Financial Times:


What, after all, is the incentive for the Greeks to reform their government and economy if the benefits accrue to creditors indefinitely? Next to none.

Fools who lent money, without asking questions, deserve to share in the pain. They should not expect Greeks to rescue them from their folly, after the fact.

Meanwhile, Keep Talking Greece agonises over the violence and some irritating comments submitted on her site. Her conclusion:


What do you do if you have no income? You go and demonstrate, you raise your voice against the laws and parliament bills that delete you from the list of living human beings. Or you sit at home and count your cups in the board, deeply depressed. Or you fight with your wife and beat your children. Or if you live in a social state, you sit on your couch and enjoy social benefits. Until the time the doctors declare you’re officially dead. Physically. Then metaphorically, you’ve been  dead for many years, because you never left your couch, raised your voice and fought for your rights.

In the meantime, as a result of my less arduous retirement activity of combining a rather a large amount of part-time teaching at the moment with some research, I stumbled across this wonderful post from Andrew Whitehead about the old political anthem, The Land Song. You should take the time to listen to the unique recording from 1910 embedded on both his site and in the piece he wrote for History Workshop Online.


Hark the sound is spreading from the East and from the West,
Why should we work hard and let the landlords take the best?
Make them pay their taxes on the land just like the rest,
The land was meant for the people.

There is something touching about these old political songs. Is it simply the poignancy of their naivety, the enormous faith they have in the marvels to be worked by their chosen reform? I am not sure, I think that there is more than that. Popular song, and particularly marching tunes, are the accompaniment to action. They are the demotic art form of people shaping their own lives and destinies. The optimism is palpable.

The Land Song became a Liberal Party anthem, but it's provenance is earlier and lies in 19th Century Radical Liberalism, specifically in the Single Tax campaign of Henry George, part of the radical milieu of the time that brought together socialists, liberals, individualists and anarchists amongst others. It was an enormously creative period and I never lose my fascination with the intellectual ferment of the era. (I have posted before on radical liberalism here and here.)

I suppose it is the refrain that reminds me most of Greece today:


Why should we be beggars with the ballot in our hand?

Why indeed? And this points to the fact that the Euro crisis is not just a financial crisis, but one of democracy. One where the vote seems to be powerless against the institutional might of the Troika*. I despair that political leaders seem oblivious to this danger as the indecision persists. And so the demonstrations and strikes continue, not only as a reminder of deep discontents caused by the crisis, but also of an expression of something more, life itself. To be active not passive. To not stand by. To be human.


Yes, yes, at Occupy Wall Street the madmen, the madwomen, the Groaners and the neo-Muggletonians will eventually have their day, and the movement will be ruined ... So the movement will stumble and fall, and a lot of young people will feel a little embittered and distraught.


That day will come. But not yet! Meanwhile there are realities to proclaim and feelings to vent. Occupy Wall Street and its sleeping-bag neo-hippies and its costumed street thespians and the touchingly hand-written placards and generally the display of eccentricity and impudence have focused America’s attention for a fleeting moment on economic wrongs and inequalities. How wonderful!

Wonderful indeed. And the thread that joins the Georgists to Greece is one of optimism, the assertion of popular pride and the profound hope that something better will emerge from the ruins of today.


The army now is marching on, the battle to begin,
The standard now is raised on high to face the battle din,
We’ll never cease from fighting ‘til victory we win,
And the land is free for the people.

*The European Commission (EC), the International Monetary Fund (IMF), and the European Central Bank (ECB)
Hat tip to Dan for the Whitehead link.
Posted by The Plump at 6:55 pm