I give up. I really do. At least the stupidity of the authors deciding to boycott PEN America's free speech award to Charlie Hebdo has been widely condemned, but some of the mealy-mouthed defences that have been put up are incredible. PEN itself, eloquently "rejecting the assassin's veto," has at least acknowledged the magazine's stated aim as being to "reject forcefully the efforts of a small minority of radical extremists to place broad categories of speech off limits", even if it does hedge them with standard conditionalities about offence and not needing to "endorse the content of Charlie Hebdo's cartoons." Of course the prize for the absolute worst defence, laden with slanders, is in the Guardian. Where else could it be? Here are some of the corkers -


"The satirical weekly has indeed published racist, sexist or offensive cartoons"; "there is no honour in caricaturing the marginalised"; "what Charlie Hebdo now represents – namely sneering and dismissive attitudes towards immigrants across Europe"; "the original decision rather smacks of a white, privileged, smug and superior establishment coming together in solidarity with a publication that some regard as racist."

Bloody hell; this is a defence?

It is perfectly obvious that all this crap is the result of a deliberate, viral smear campaign. The far left orchestrated it to cover their embarrassment after their beloved far right theocrats committed a mass murder of unarmed leftists and Jews. They launched a campaign of calculated lies in the English-speaking world. And how they succeeded. The truth is that Charlie Hebdo is anti-fascist, anti-racist, forcibly pro-immigrant, and pro-Palestinian. It campaigns against austerity, poverty, inequality and for workers' rights. It is the total opposite of how it has been painted. It is a paper of the radical left. It isn't particularly obsessed with Islamism either, as this infographic, published by Le Monde back in February, makes clear. 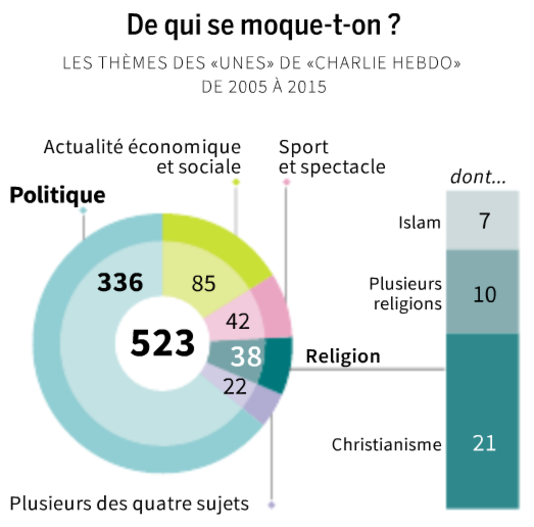 Yes, that's right. Out of five hundred and twenty three covers over ten years, Islam only featured seven times. Charlie Hebdo even took the piss out of sport six times more often! Yet its leftist enemies are trying to paint it as an Islamophobic hate rag.

This despicable and indecent propaganda could only work in the English-speaking world. Where else would you find people in such numbers who couldn't be bothered to read the magazine itself, who can't read French and who know nothing of French politics or the prominent incidents that were being satirised. Where else, on the basis of such lazy ignorance, would individuals and news outlets be willing to self-righteously parrot lies?

The authors that protested PEN's award talked of the magazine's "cultural intolerance." Well how about their cultural ignorance? Even without mentioning their moral failure in the face of murder, they stand condemned as a bunch of bloody Francophobes.
Posted by The Plump at 5:55 pm

Thanks for this. I admit that I too was suckered by the attacks on
Charlie Hebdo...until I read the real story behind the magazine (including posts from you).

The staff were murdered in cold blood. There was no reason for it, none whatsoever. They deserve to be honored--but it seems that some just have to (pardon my language) piss on their graves.

The Far Left has become a cesspit. Nick Cohen was right in his book WHAT'S LEFT?.

Ironic that the Spectator prints a principled defence of the left, whilst the Guardian comes out with fascist apologia.

I would just amend what you say to 'parts of the far left' (and not just the far left either - some of the worst offences are committed by the oh so moderate left). There are some leftists still standing who didn't gleefully leap into the sewer, but not that many.

Thanks for this,O Stout One. I too have been confused by the Hebdo reactions. Such as the American Christian Far Right's campaign led by Texe Marrs in Texas under the banner 'We are NOT Charlie Hebdo'. Before long, will the Guardian start offering advertising space to ISIS? This is a world of frustrating despair. I'm glad these are my twilight years. The future looks bleak.

Very interesting. Unfortunately, the kinds of people who act as apologists for Islamist terrorism aren't really interested in facts. But it's good to know that Charlie was more Sportophobic than Islamophobic.