Here is a screen grab from a newsreel of Remembrance Day 1948 at the Cenotaph. 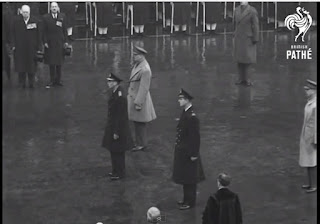 The band is playing God Save the King. Clement Attlee is singing loudly, next to him a scowling Winston Churchill remains silent. In 1948 the war was a recent memory, its commemoration deeply personal.

It was dumb politics by Corbyn not to sing the anthem at the Battle of Britain commemoration as it gave the press something to attack, but how puerile the whole debate has become. Remembering the awful cost of the necessary defeat of fascism should be personal, reflective and not a set ritual that leads to abuse if you deviate from the approved routine by wearing the wrong overcoat or failing to mumble the words to the national anthem. It is trivialising something profound.
Posted by The Plump at 3:57 pm

Is there any reason to think that Corbyn would have been supporting the war effort if he had been around in 1940? Isn't more likely that he would have spouting the CP line that it was a conflict between two lots of imperialists and defending the Soviet occupation of the Baltic states?

Yes there is. He isn't a Stalinist and never was. He would have called it wrong in the inter war period as he is a pacificist (AJP Taylor's term, not mine), but I have little doubt that in an extreme crisis he would understand the side to be on, even if in a non combatant role - just like his parents.

Peace politics is not that simple, though often profoundly mistaken. The PPU is much closer to where he stands than the CP and it fell apart after 1939. Corbyn has taken plenty of dubious positions. Let's not saddle him with one from before he was born.

Corbyn is very relaxed about Putin's annexation of Crimea and his attack on Eastern Ukraine. It seems unlikely that he would have been bothered by Stalin's occupation of the Baltic States. He is very good at 'understanding' anti-Western autocrats.

Yes, but the position he took when he actually was alive, was to support Solidarity against the Soviet Union in Poland.

Besides, how do we know? I am waiting for the 'Would Corbyn have supported Attilla the Hun' headline. Let's stick to reality. More than enough to go on there.

I wasn't aware that he supported Solidarity. So he has changed and not for the better.

No he hasn't changed Bob. There have been a range of positions taken by what you can broadly call the anti-imperialist left. The starkest division was between the Stalinist tankies who supported the Soviet Union and the Trotskyist/New Left that were critical of the Soviet Union, though with different ideological justifications. Both wings were against what they saw as western imperialism and supported national liberation movements in the developing world. This is very much Chomsky's world view. And this is the one Corbyn comes from. The main problem arises from a misidentification of a range of movements and regimes as being anti-imperialist and therefore to be supported, regardless of their real politics. The secondary one is a default position of assuming western aims as always malign, and therefore its opponents virtuous (or progressive), rather than making a judgement on each case. So the position that he took on both Solidarity and Islamism is straight from Chomsky.

The 'default position of assuming western aims as always malign' might well have led him to oppose Solidarity. After all it was supported by Ronald Reagan, something which the Poles are grateful for:

But if Corbyn supported the Poles against the Soviet Union and doesn't support the Unkrainians against Putin's Russia, that looks like a change for the worse to me.