I was at the FA Cup semi-final at Wembley on Sunday. It was a great day out with friends. The rebuilt stadium is impressive. Escalators took you up to your seats high in the stands. Stewards were everywhere, every part of the design regulated the flow of people and made overcrowding impossible. Seats were comfortable and spacious. Outside, the policing was efficient and good natured. The queues for the underground were well managed, making sure that the platforms and the trains were not overcrowded. Even the train announcer cracked jokes at the fans over the tannoy.

At a semi-final twenty-seven years ago the authorities managed to kill ninety six people. At last, at long last, the killings have been declared unlawful. Prosecutions may follow. This superb report from David Conn, one of our best football writers, is damning. Read it all.

Now look at the pictures, not just the awful ones of the mayhem and the dead. Look at the ground. See the shallow steps that fans stood on, where even craning your neck you could only get an obscured glimpse of the game. And then there are those fences. Cages for fans, penned in on either side and prevented from getting to the safety of the pitch, away from the carnage. It isn't in this report, but one of the most poignant pictures shows empty spaces on the terracing adjacent to the pens where people were being crushed to death. If they had been able to move there, no one would have died. The same goes for being able to evacuate onto the pitch. The standing areas in Hillsborough were a crumbling, squalid death trap.

Manslaughter happened that day because of two things. The first was an attitude of uncomprehending hatred of football fans by those who ran the game and a political elite who had yet to find supporting a club to be a vote-winning fashion icon. The response to the real problem of the violence of the minority was punitive to everyone, the innocent majority included. Grounds were changed to be like prison camps and facilities were rarely upgraded. They were an emanation of the way ordinary fans were despised.

The second was a managerial culture that favoured mediocrity and the exercise of authority over intelligence and expertise. Being both a boot licker and a bully was the way to promotion. I have often seen this phenomenon in education, though there the cost can be measured in careers and qualifications, not in corpses.

After the deaths came another crime, a conspiracy to pervert the course of justice. Like all conspiracies, it soon unravelled. But it still took twenty-seven years of struggle for the authorities to finally, and reluctantly, concede their guilt.

I have been in a bad crush once. It was outside a first division football ground in London in the early seventies. The gates had been closed with queues of people still outside. The game was not televised (no league games were then) and it wasn't all ticket. A narrow street leading to the ground was packed as people funnelled in to try and get into the ground. Once you are in a crush you are helpless, swept one way and then another. The police had lost control and a frightened police horse was trapped in the entry with us. At last I was was pushed towards wrought iron gates. At first I was grateful to be able to breathe through them, then the pressure intensified painfully until the locks gave way. They burst open and the crowd stumbled through them into the wide open forecourt and car park that we could see but couldn't reach. Nobody fell. We were safe. I was young then. I got through the turnstiles, into the ground and watched the game, but when I looked down my shirt was torn and all the buttons had been ripped off. Looking back, I know that we were all lucky.

It is so different today. There is much wrong with modern football. The economics of the game leave a nasty taste. TV matches are nearly all on pay-per-view. Fans are locked out of ownership of the clubs they love. We need safe standing, after all we have it already as people stand in nominal seating areas. There is the creeping gentrification and the ubiquitous corporate takeover. Then there is the expense. It wasn't cheap to go to Wembley. But then again, I would rather be treated as a cash cow than as cattle going to slaughter.

My only worry today is about getting a ticket for the final. 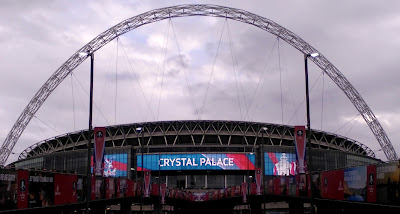