"This mentality is unstoppable" 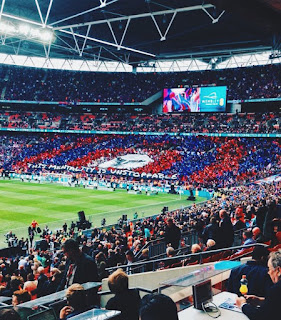 Unfortunately, it isn't. There was no cup to bring home. But there is no doubt who won the battle of the fans. It was incredible.

I don't share most other fans' antipathy for Manchester United. I have had a long connection with them, even though I always had a nagging sense of infidelity when I watched them, knowing my heart lay elsewhere. What I don't like is what they have become. The ownership issue is horrible and it stopped me going to matches there, but it isn't just that. It's the condescending sense of entitlement of a large number of their fans. Some of the most loyal and passionate, including people I know, have given up. They were alienated by the club's determination to be a 'brand', to brook no dissent after the green and gold protests, and to turn their fans into cash-generating 'customers' to feed the leveraged debt of a Cayman Islands registered company. It used to be a football club. On Saturday, their fans were mainly apathetic and quiet until they booed their manager as he went up to be presented with the cup. Afterwards, he was sacked for finishing fifth and winning at Wembley. Either would be a dream for Palace.

At the other end was something else. A gloriously unpretentious South London club showed how to support your side and cheer them on to glorious defeat. What would it have been like if we had won?

This is a wonderful shot of Jason Puncheon's mother in amongst the fans. He's local, grew up within sight of the ground, and his family are all Palace fans. He plays wearing the squad number 42 and scored our goal. 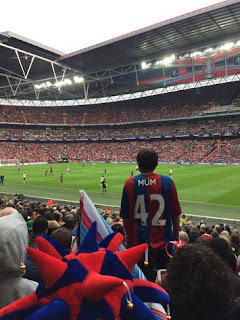 It was the display designed and choreographed by the Holmesdale Fanatics that caught the press' eye. Everyone bought into it. It was stunning.

I was in one of the seats in the top tier and all around me flags waved amongst a sea of red and blue balloons. The noise was deafening. After the Palace goal, the stand was physically shaking. It felt like an earth tremor. 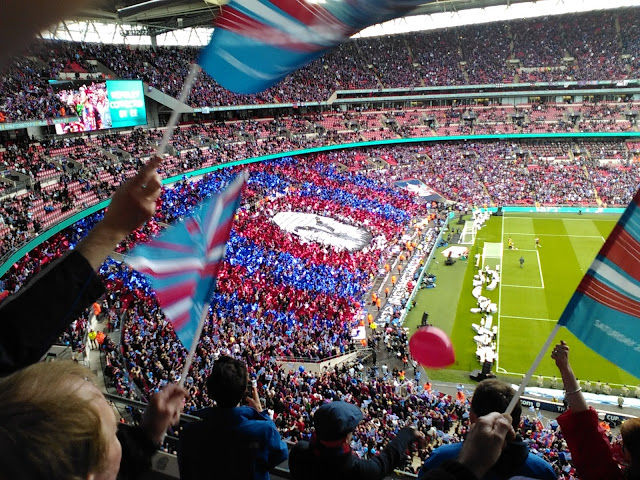 My memories are not just of a great game and heart-breaking defeat, but the camaraderie between friends and thousands of other fans who were coming to party and give their team everything that they had to offer. 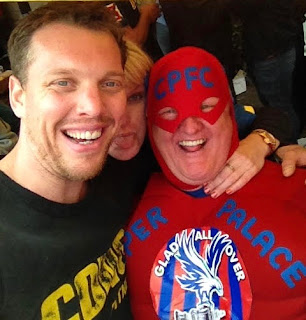 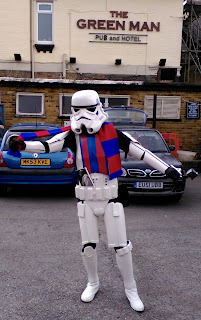 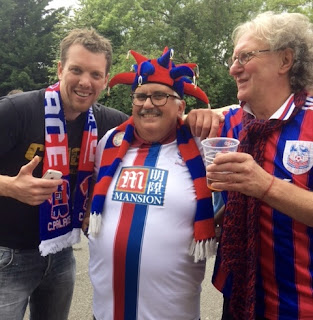 I drove part of the way, catching a train to Wembley Stadium from Banbury. As I drove back, I stopped off in a motorway service area. It was full of United fans who gave my Palace shirt a glance and said nothing. They looked as if they weren't bothered. There was no air of celebration. I was numb with disappointment, but overwhelmed by the emotion of a wonderful day that I wouldn't have missed for anything. If, in the unlikely event of Palace kicking on and becoming a top club, I hope we never lose that exuberance and lack of pretension that makes our support something special.

We'll be back. And please, before I die, let's win the bloody thing.

Of the fan videos being posted on line, this really shows the contrast between the fans in the build up to the teams coming out.

What a lifeless bunch the MUFC fans seem!

I wish I could get into football. The mixture of permanent disappointment, romance, and excitement appeals to me. I just can't get past the fact that I find it a very boring game to watch.

The tedium is part of the suffering that makes it so great.

The rugby league was great the following weekend and I meant to blog on it, but time slipped away.