Forget the cloth cap image, Rugby League has always been innovative and has led the way only for others to follow and claim credit. Its holy grail has always been expanding the game. Often this has resulted in failure, but these days the sport is focusing on more organic growth, with new teams starting in the lower leagues and progressing on merit. Geography has never been an obstacle. This year Toronto Wolfpack (yes that is the Toronto in Canada) are playing in Championship 1 alongside teams like Barrow and Hunslet, as well as other clubs trying to build the game North and South.

Last year, it was the turn of the South of France when Toulouse Olympique XIII joined and won promotion at the first attempt, joining Swinton in the Championship. They played each other at the weekend. What an opportunity. I and a couple of hundred others grasped it, struggled with an air traffic control strike and made it over to Toulouse. Having got, nothing was going to stop a memorable weekend.

The stadium is in Blagnac, a very bourgeois suburb. It's so quiet on a Saturday evening that you felt you had to whisper as you walked through streets whose life had been choked out of them by stern respectability. Then, in late afternoon on a hot spring day, Swinton fans arrived from the city centre. Few had stopped drinking from the moment they arrived in France, most had sung continuously. The barbarians had arrived. Amiable, humorous, warm spirited, and boisterous barbarians. It was brilliant.

Then on to the match where the noise was non-stop, Swinton supporters amongst the 2,300 crowd trying, and often succeeding, in making more noise than the French brass band in the stand. It was a superb game, where a fine Toulouse side were taken very close, only winning 36-28 on successful goal kicks after both sides had scored seven tries apiece. 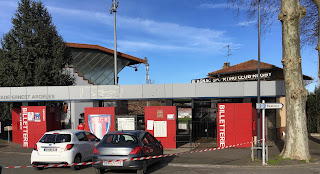 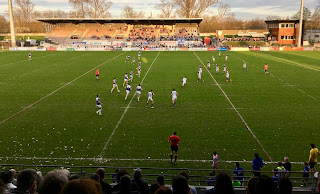 You can watch the whole game here:

The crowd dispersed for more drinking, dining on cassoulet, and sightseeing on the following days. It was a celebration of our international Rugby League family, of the delights of Europe, and of the general friendship that sport can engender. For me, they were four unforgettable days in two beautiful cities - we took an extra day in Carcassonne. There was sumptuous cuisine, historical sites, great art, and sporting comradeship all rolled together. 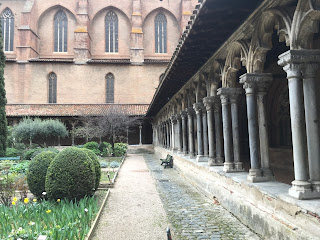 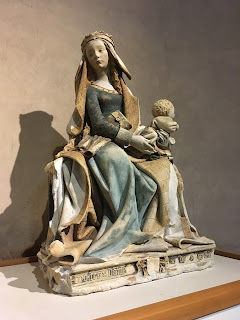 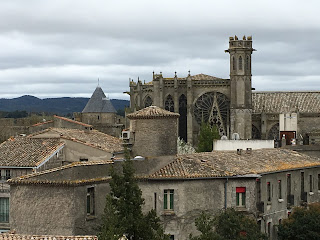 And as fans bumped into each other as they wandered round the town, they all said they same thing. Will we be going to Toronto?
Posted by The Plump at 3:52 pm