A big, expensive legal fight was won against the government and Parliament was given a vote on moving article 50 on exiting the EU. The Fixed-term Parliaments Act was passed to stop the calling of a snap election on the basis of the government's short-term advantage. Parliament had to approve an early election by a two-thirds majority. Great, but only if the opposition doesn't decide to vote to do whatever the government wants. Parliament's power only exists if it is prepared to use it.

Now the right are consolidating their victory by holding an election to give them even greater control, presumably on the grounds that the Labour Party may not remain supine forever. 'So, Mrs May, what was it about a 21% lead in the polls that made you decide that an election was in the national interest?'

A Tory victory is a foregone conclusion. The size of the majority will depend on where the votes are cast and how effective tactical voting will be. But their lead is unassailable. The irony is that May is unimpressive at anything other than delivering platitudes. But once Miliband's ineffective leadership was replaced by Corbyn's destructive incompetence, we were doomed. It's as depressing as it was predictable (and predicted - this isn't hindsight talking).

This will be portrayed as a Brexit election. It isn't. Brexit will only become an issue when the consequences begin to unfold, but by then May will have a free hand. Although in another way, this is all about Brexit. Once again, I will have to get into the habit of agreeing with Tony Blair:


Some say it is to defeat the Tory Right so that she can go for a “softer Brexit”. This is naive. The opposite is true. At present, if she wanted to face down the Tory Right she has a Parliament with a majority to do so. What she doesn’t have is a Parliament that would vote for Brexit at any cost.

For the next couple of years Parliament will be marginalised, all the resources of government will be directed towards mitigating self-harm in the hope that the eventual deal will not be much worse than one we have already. What a criminal waste. And this is a crime which will leave many victims. One day someone will have to step in and clear up the mess, but who and when?

Sod it. From now on I am going to blog about cats. 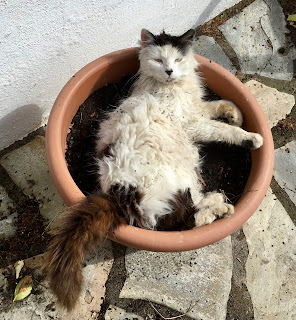