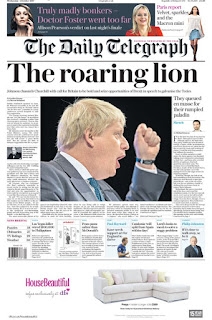 A few days ago the Daily Telegraph led its front page with the speech of that egregious liar, our Foreign Secretary, under the by-line: "The Roaring Lion." This is quite mad. So is the speech by this arch reactionary in fancy dress who talks of Brexit in terms of Agincourt. Theresa May's speech, dogged by a virus, a prankster, and collapsing scenery worthy of the worst 1960s soap opera, was a disaster. But it was one of cringe making pathos, as the inadequate attempted the impossible. It wasn't the worst speech of the conference. She was inept; Johnson and Rees-Mogg were worse, they were sinister.

Whenever I hear the nationalist right expressing their deep love of our country and the glories that will come to us when we shake off the tyrannical yoke of our biggest trading partners and closet allies, I don't think of their disregard of simple things like facts, evidence, or truth. Instead I think of Oscar Wilde:

And all men kill the thing they love,
By all let this be heard,
Some do it with a bitter look,
Some with a flattering word,
The coward does it with a kiss,
The brave man with a sword!

Nationalism kills patriotism; and it kills the country it professes to love.

It's one reason why nationalists like referendums. They are faux-democracy; they flaunt democratic values, even as they undermine them. Democracy is a network of interlocking institutions, checks and balances, underpinned by elected representatives. Referendums by-pass all these safeguards and offer a one-off marketing exercise. Sell your fad or obsession to enough people just once and the entire structure of democracy is undermined. Referendums kill democracy.

All British national and regional institutions were opposed to Brexit. All parliaments, councils, and assemblies were opposed. Business and trade unions were opposed. Academics and the medical profession were opposed. Scientists and all our trading partners and allies were opposed. It could never happen. There was one shot. A referendum, where a bare majority of the honest but inexpert could overrule the lot. This wasn't the triumph of democracy, so much as its betrayal.

Nationalist crimes agains democracy are being committed in Hungary and Poland. While the polarisation in Britain is now being experienced by Spain. I don't know enough about Catalonia to have an informed opinion, other than a revulsion at the brutality of the Spanish Police, but the Catalan left are making it clear that they do not support the nationalists.


The appalling scenes of police violence that took place on 1 October in Catalonia along with the most baffling disrespect for democratic procedures and democratic substance that preceded them a month ago in the Catalan Parliament urges us to raise a collective voice.
This voice belongs to the democratic, non-aligned left, a left whose expression we have been longing for. While this voice unequivocally and strongly condemns the authoritarian violence endorsed by the central government, it sternly and democratically resists nationalistic discourse. We refuse to accept this binary as the choice we must face.

And in the same way we should cancel Brexit, assert our democratic values, heal our divisions, and end the xenophobic hostility that the referendum raised. In that way we can save the country we love, rather than let it be transformed into the plaything of a deranged and obsessive right.
Posted by The Plump at 3:49 pm