Greece and a tragedy 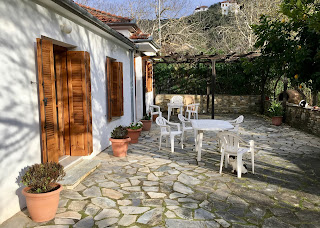 It's a lovely mild winter in Greece. The leaves are falling and the citrus is ripening. I have a one way ticket. I will probably return to the UK sometime in late January. Both circumstance and choice means that my life is lived in two places, rather than here alone.

I can come and go as I please because I am an EU citizen. My rights are guaranteed by freedom of movement, as laid out in article 45 of the Treaty on the Functioning of the European Union. Until now. A small majority of my fellow Brits have voted to take this right away from me and to strip me of my citizenship. A legal right will become something that can only exist at the discretion of the Greek government and the European Union's rules on the citizens of third countries. I have no idea what this will mean for me. Nor do millions of other people in the same position. Lives are being ruined to no good purpose.

It was a disastrous decision, but rather than handle it constructively and minimise the damage, the government has been driven by the fanatics and fantasists in the Conservative Party (with a little help from the weird Lexit brigade), aided and abetted by staggering incompetence and over-confidence. I could go on and on, but this gives a good summary. Consumed by fury, Brexiters spit bile at the EU for the perfidy of doing exactly what they said they would do. Remainers are called remoaners for pointing out the obvious. The British government blusters, promises the earth, and then submits to what is required by law and treaty, the only options available to an organisation of, for now, 28 nation states. The choices we face are over how much poorer and how less influential we will be. Even if we abandon Brexit now, much damage has already been done.

And as it becomes evident that Britain is giving away its power to shape decisions in its vital national interest, Theresa May is making her last stand to make the world safe for tax havens. I think my country has gone mad.

We will see what transpires as reality begins to overwhelm wishful thinking and people realise what it was they were actually voting for. The latest poll has a 50% majority in favour of a second referendum. This is a bit of a misnomer, it would actually be a third referendum. The first was in 1975 and the score is currently one-all, extra time and penalties beckon.

This is the curious thing. Governments make mistakes. Sometimes they are serious. Brexit is in the first rank of notable errors. It ranks alongside the return to the gold standard in 1925 in adverse economic impact, though that was far less complex and easily reversed. It comes a long way second behind the Munich agreement of 1938, whose consequences killed 50 million people. But what is different about both of those is that the people taking the decisions thought they were right to do so. Munich is still the subject of historiographical debate. Brexit is being delivered by a Prime Minister who campaigned against it. Politicians who voted for it in Parliament are on record as saying it will be catastrophic. Business is against it. Science and industry is against it. The TUC is against it. The universities are against it. Most economists are against it. All our closest allies (with the exception of an American president drawn from the same stable) are against it. All those with whom we wish to agree post-Brexit trade deals are against it.

17.5 million voters out of a UK population of 65.6 million have defined "the will of the people." If a mere 600,000 people had voted differently, the result would have been reversed. I can't remember such bombastic certainty, to be based on such fragile support.

But then again, Brexiters' nationalism is so un-English. If our national characteristics are reticence and self-deprecation, they are born from a very deep self-confidence. The sheer belligerence of Brexiters, their lexicon of treason and betrayal levelled at all opponents, are signs of something else. They know that they have attached themselves to nonsense. They know that they are about to impoverish the nation. They know, deep down, that they are failures and that Brexit will be as reviled by future generations as the Gold Standard and Munich. They just can't admit it.

Brexit is a contradictory shambles, promoted by obsessives, sold through illusion, and implemented by incompetents. It is so shoddily built that the slightest wind could bring it down. It's only support is another English trait, embarrassment, being seen to do the right thing, "respecting the referendum result." Could we cope with admitting a mistake and finding a way out?

There is a passage in Max Stirner's The Ego and its Own on the death of Socrates that reminds me of our predicament.


How they do praise Socrates for his conscientiousness, which makes him resist the advice to get away from the dungeon! He is a fool that he concedes to the Athenians a right to condemn him. Therefore it certainly serves him right ... That he did not escape was just his weakness, his delusion of still having something in common with the Athenians, or the opinion that he was a member, a mere member of this people. ... as he had uttered no sentence of death against himself, [he] should have despised that of the Athenians too and escaped.

Let's not drink the hemlock. Let's escape. Let's survive. There's no shame in sanity. Besides, I have a Greek dream of my own to live.
Posted by The Plump at 2:59 pm