Standing up for standing

A great day out at Stoke, standing in the raucous away end. 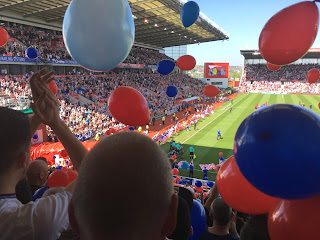 Of course the stadium is all seated, as is required by law in the top two divisions, but, as is now tradition, all away fans stand throughout the match, as they do in sections of the home areas. Standing is banned in all seater stadiums. It is unenforceable. Standing makes for a great atmosphere, but those who want to sit, or who have to for health reasons, can't, despite buying a seat. And when you are standing in seating areas, there is nothing to lean on or to prevent spectators stumbling, you only have the hard plastic back of the seat in front, painfully placed at shin height. Useless.

Safe standing is nothing like the old terraces. Every spectator has a numbered allocated space behind a crush barrier, for support and protection. The Football Safety Officers’ Association says that it is far safer than the current customary practice. In the name of safety the government is digging in its heels to make grounds less safe. This is madness. Let's give the last word to Palace fans at Selhurst. 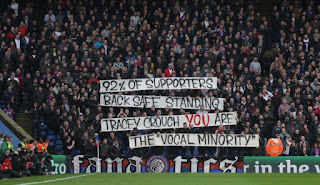