I love it here. This is one of the most beautiful corners of the world. I have some good friends. I will never get tired of the sunsets ...

... and I will always be made tired trying to keep control of  my large garden and deal with all its produce. 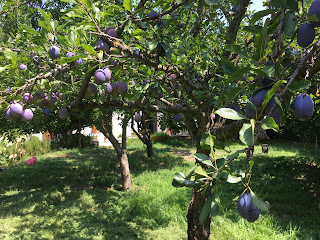 We bought it nearly seventeen years ago. We couldn't afford it, but knew if we left it until later, we never would be able to buy. It was in a bad condition and most of my earnings have been ploughed into improving it, as have most of my hopes. It was a retirement dream to be able to live as much of my life here as possible.

However much I loved the place, I would never, ever have bought a house if Greece hadn't been in the European Union. My rights as an EU citizen gave me the security to be able to buy and to know that I would always be entitled to live here - either full or part-time. For a while I was anxious about the effect of the Greek financial crisis, but nobody could have thought that the UK would do something as stupid as leave. After all, Brexit was just an obsession of a few ideologues that led the Conservative Party to commit electoral suicide for thirteen years.*

The decline in the value of sterling has cost me a lot of money, but that is only one effect. A soft Brexit, where we retain our membership of the single market and keep freedom of movement, would cause the fewest problems. There would be some headaches, but they could be surmounted. A hard Brexit, leaving the single market and thereby ending freedom of movement, would effectively destroy my plans for my final years. I would be able to visit, but my time here would be legally limited and there would be many other complications and expenses. Who knows what a no-deal Brexit would do? My guess is that it would ruin my life.

Now the rhetoric is becoming alarming. It may be a bluff, but sometimes they can go awfully wrong. Chris Grey puts it succinctly:


No bogus statistic, half-truth, misunderstanding, naivety or downright lie is left unuttered. The world looks on, bemused and amused, at the spectacle of a once-respected country now simultaneously belligerent and absurd, daily trashing its global reputation even as it proclaims and romantically remembers itself as a global power.

Old nonsenses, such as the pivotal role the German car industry will play in securing a great deal, are dusted down and joined by new ones, such as Dominic Raab’s assertion that only by not having a deal will getting that great deal be assured. Every report of the resulting damage is dismissed as not being caused by Brexit, or discounted as being worth it because of Brexit.

The signs of that damage are all around us, from the latest collapse of the pound in anticipation of no-deal Brexit, to the latest news of the collapse of investment in the car industry, the latest desperate plea and warning from that industry, and the latest warning from the Bank of England. But no evidence or rational argument is allowed to intrude on the cult, putting civil servants, in particular, in an impossible position. True belief is all.

All the lessons learnt in three years of negotiations and internal wrangling have been cast aside in favour of long disproved bollocks and aggressive posturing. We're back to 2016 as if nothing has happened in between. It's not doing the cumulative consequences of my three years of stress, anxiety, and constant anger any good.

OK, I'm just a highly privileged former academic with a reasonable pension and a second home having a moan. But I am never going to be the worst affected. Let's think about what this will mean to the employment and life chances of so many people, especially the young and the poor. There is no credible study that says that Brexit can be anything other than economically damaging. The only debate is over the extent of the immediate impact, whether it will start a long slow decline or whether it will produce a severe shock. Millions of people will be hurt, many lives ruined, thousands of small businesses will close, big industries will leave or scale down. We will all be poorer than we would have been if we had remained.

Amidst this mess, there's a question that haunts and is seldom asked. Just what was so intolerable about the previous forty-six years? How much did people suffer from EU membership to make them want to inflict this on so many people? What hurt made it so imperative to tear up the basis of our economy and international relations? Why did it seem such a good idea to take this formidable risk with the future of our nation? And on a personal level, I can't understand why spoiling the last years of my life is so important. But then, this is what always happens when ideology detaches itself from material reality and politics becomes about chasing a delusion


* There is an irony here as well. A short drive up the coast the Johnson family have a holiday home. Our new Prime Minister is a frequent visitor - almost a part-time neighbour. I have never met him, but I know people who do know the family and have plenty of stories to tell, as do local small traders who have dealt with him. Few of them are complimentary.
Posted by The Plump at 1:30 pm