I flew in to Volos last Sunday before promptly falling victim to a stomach bug and I am only just regaining normality. And the scene in Volos city centre when I arrived was certainly normal. Warm spring sunshine, the Argonafton bustling, the restaurants full. 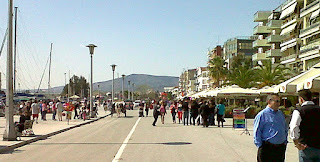 The crisis? People still enjoy themselves and, though austerity is casting its net widely, we are not all in it together. Funny how this is the one net where the bigger the fish, the easier it is to wriggle free.

A retired pharmacist brought economics back to the headlines in Athens by blowing his brains out near the national parliament building. And Jon Henley's reflections on the suicide highlight the impact of austerity on living standards.

Certainly, many Greeks are in desperate straits. In its fifth straight year of recession, Greece has seen its GDP shrink by a crushing 17%. Unemployment currently stands at 21%. Wages have fallen by a third since 2009 and are set to slide a further 15% in the next three years. Pensions, as Christoulas dramatically demonstrated, have been slashed.
The austerity measures imposed by the IMF and EU as a condition of Greece's successive bailouts have seen one in 11 people in greater Athens reduced to using soup kitchens daily, stocks of half the country's most prescribed medicines running out.
On my trip I met a secondary school teacher whose pay, which stood at €1,200 a month in 2010 and was cut to €850 last year, is set to fall to €600 from next month (his rent and bills remain €400), and a child psychologist who has not been paid at all since December; she and her two small sons have had to move in with her mother.

Whilst policy makers seem to ignore the architecture of monetary union, others are certainly raising the question of the future of the Euro. This year's Wolfson Prize for economics is being awarded on the basis of the best plan to break up the Eurozone. In a profile by Zoe Williams, the BBC economics editor, Stephanie Flanders, put the significance of the Euro crisis succinctly:


It's more than a disaster, I think it's a tragedy. It was quite an ambitious project, which had pros and cons, but it was basically mis-sold to everybody. So the Germans were sold it as a way of spreading a German approach to economics, and German stability, across the eurozone; but they were told that it would come without any obligations on them, there would be no bailouts. At the same time, the others were told this was a quick ticket to German stability, and they would get low interest rates and low inflation, and they weren't told: there's one catch – you have to be as competitive as Germany for ever. And if you do have any problems, all the usual tools you'd use to get out of them won't be available to you. For many of these countries, the implication is years more austerity, which has a big sign on it saying, 'Brought to you by the euro.'

I suppose the clearest message against economic orthodoxy, even more poignant given Christoulas' suicide, came from South Korea. I have often argued that individual human liberty cannot be extended to its fullest in anything other than conditions of the maximum possible security.  Ha-Joon Chang makes the same point, but implicitly asks what the point of an economy is in the first place. If it is to make people happy, then we are on the wrong road.


The sad tale of my country should serve as a salutary warning to Britain and other European countries that are embarking on major cuts to welfare. They believe that such cuts will reduce budget deficits and make their economies more productive by making people compete more vigorously. However, the Korean story shows that insecurity actually makes people less, not more, productive, and also desperately unhappy. Surely, that is not what they want.

The bit that took me most by surprise was reading that Stephanie Flanders is the daughter of Michael Flanders, one half of the comic song partnership, Flanders and Swann. You will have to be of a certain age to remember them, but they were part of the background music of my childhood. So to continue with the Greek theme, what better to finish on than with their version of To Kokoraki.

All this - for which many thanks - on a bad stomach? Are you boasting?