I am going back to Greece tomorrow and the only downer is being so far away from Rugby League land. Mind you, I have stocked up for weeks on live action over just three days. Swinton had an agonising last minute defeat against the league leaders Halifax in a thriller on Friday night and then it was the Magic weekend. Three games played on Saturday and another four on Sunday; every Super League team in action, one after the other at Manchester City's stadium. 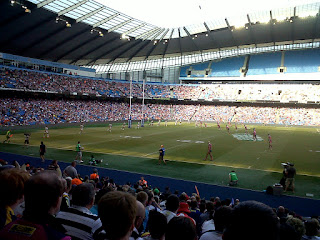 It was one of those occasions that Rugby League manages so well. For all the sport's administrative failings it is never afraid to try new ideas. It had the lot; a festival atmosphere, helped by glorious Manchester sunshine, some great running rugby, a Wigan/Saints punch up and a stunning Hull derby, won by Rovers in the final minute, which left me filled with nostalgia for place.

And then there were the fans - noisy, often pissed, without any segregation or trouble and loads of families together. My prize went to the Hull KR hen night party all dressed in specially printed tee-shirts, bright red frilly tutus and not a lot else (apart from the bride who had a white veil as well). That was going to be one hell of a night on the town.

Events like this show how the game has progressed, but it couldn't have happened without some major changes for the better in recent years. Rugby League's move to becoming a summer sport was obviously critical, this wasn't something for a January weekend at Odsal. Then there are the new stadia and the incredible development in pitches so that seven games could be played in two days with very little wear to an excellent surface just after the football season has finished. I remember the seventies and eighties when you would have been lucky to find a single blade of grass left.

It was a great way to prepare for my departure to a Greek summer of sun, crisis and village gossip. If only they played Rugby League.
Posted by The Plump at 11:40 pm

Syriza Saints v Troika Tigers... now that could get bloody!

We DO play rugby league. Have a look in www.rugbyleague.eu/

Bravo! Now we need a team in Volos.