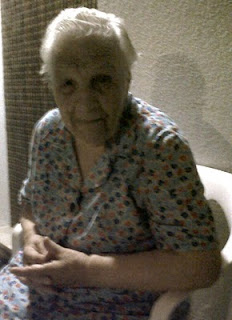 She's one hundred years old now. Eleni was my neighbour until old age forced her to go and live with one of her sons in Volos. She is back in the village at the moment, staying with another of her sons, so I dropped by to see her.

There were hugs and kisses, she is always pleased to see me. I think she appreciated us as neighbours and liked us around the place. Her hearing and vision isn't great, but though frail her sense of humour is buoyant and she rocked with laughter at my wild gestures that tried to convey some sort of meaning that my Greek language could never manage to do.

There is no flash on my mobile phone so the picture isn't great but that didn't stop her son trying to get me to take a photograph of the barbecue being built on their patio. They were trying to sell me one and thought I could show the photograph around. Sadly, it was too dark so the builder rushed to his car, stood in front of the barbecue, took a picture, showed it to me and then put his camera away. I think he missed the point.

At the moment I am reading about another Eleni, the mother of the author Nicholas Gage. She was tortured and executed for the crime of protecting her children during the final stage of the Greek Civil War. It is a brilliant, complex and harrowing book. And then I think that the Eleni I know was in her thirties when the Nazi occupation began, with its mass starvation and appalling hardships, closely followed by the brutalities of the Civil War. I wonder what she has seen during her long life, I will never know.

Still, she survived, gave birth to four sons and lives on. As does Greece, now a democratic nation, though facing new troubles. May Greek democracy too survive this unnecessary economic onslaught and leave the horrors of the Twentieth Century buried in the history books, never to be re-enacted.
Posted by The Plump at 10:39 pm