Fifty-five guests, together with sixteen musicians and servants, gathered in Philadelphia on September 14th 1787 for a farewell dinner for George Washington. The bar bill has been preserved.

The sixteen musicians and servants were more abstemious, getting through 16 bottles of claret, 5 bottles of Madeira and 7 bowls of punch.

And we're worried about binge drinking?
Posted by The Plump at 4:39 pm No comments: 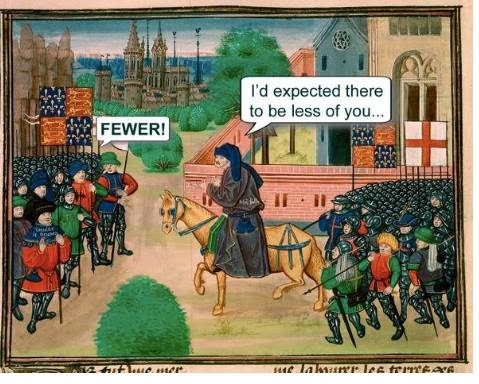 Via - with thanks to Bill
Posted by The Plump at 12:30 pm No comments:

The Guardian's Comment is Free has long been a repository of poisonous bollocks. But something that links the carbon dating of ancient camel bones with their pet obsession of anti-Zionism is spectacular even by their standards.

Andrew Brown seized on some research by Israeli archaeologists that provided empirical proof of something that was long known, that camels were introduced into the Middle East after the events supposedly described in the Old Testament, where references to camels abound. They confirmed the scholarly consensus that the Bible consists of embellished transcriptions of an earlier oral tradition. Not much controversy there, just good, solid scholarship.

Aha! You may say that. But these were Israeli archaeologists. They have a stake in this and they are being a bit shifty - you know the sort of people they are. And Brown has spotted them.


But the peculiarly mealy-mouthed nature of the quotes they gave the New York Times ... shows where the real problem is.
The history recounted in the Bible is a huge part of the mythology of modern Zionism. The idea of a promised land is based on narratives that assert with complete confidence stories that never actually happened.

Let me now give him a history lesson. Zionism does not rest on biblical sources. It developed as a secular, nationalist doctrine in the late 19th Century in response to growing anti-Semitism in Europe. It took the ubiquitous demand for national self-determination and applied it to the Jews. Initially, it was unconcerned with the territory on which Jewish statehood could be built, but there were historical and cultural precedents that would lead it to the Middle East. Those precedents lay in the fact that Jewish religious and political self-rule existed there previously until destroyed by the Romans after two revolts in 66-70 AD and 132-135 AD. The documentary evidence for this is incontrovertible, as it is for a continuing Jewish presence. This memory was maintained in the diaspora forming a religious/cultural association with the area. The link between Zionism and the territory of the modern state of Israel is founded on real, verifiable history. And Zionism itself is simply the national liberation movement of the Jewish people, asserting their right to a nation state.


I presume that the "peculiarly mealy mouthed" quote is this one, though it was from someone who was not involved in the research.

“One should be careful not to rush to the conclusion that the new archaeological findings automatically deny any historical value from the biblical stories,” Dr. Mizrahi said in an email. “Rather, they established that these traditions were indeed reformulated in relatively late periods after camels had been integrated into the Near Eastern economic system. But this does not mean that these very traditions cannot capture other details that have an older historical background.”

This is exactly what you would expect any professional archaeologist or historian to say. That is how you should approach an ancient text; as unreliable, often mythological, evidence of beliefs that may provide clues about a distant past that are deserving of further investigation. Instead, Brown does rush to a conclusion. And that conclusion is yet another feeble attempt to delegitimise Israel.

Why does this matter? It matters because good history is being misused to further bad politics. Professional caution is being misinterpreted as bad faith. And it matters because this is endemic to the unthinking partisanship that stands in the way of peaceful coexistence.

A prerequisite for a settlement is mutual recognition, not just of the right of both peoples to national self-determination, but of the real, recent historical experience of both, understanding their legitimate demands and needs. Instead, protagonists of BOTH sides are waging a war of delegitimisation, pursuing conflict rather than resolution. This doesn't help anyone - at all.
Posted by The Plump at 1:05 pm 3 comments:

Under the cover of the Olympics

What does it mean when the wolf cries wolf? Most obviously, propagandists in Moscow and Kiev take us for fools — which by many indications is quite justified.

As the Winter Olympics get smiling coverage despite it all, this article on the Ukraine from the historian Timothy Snyder puts Putin's grisly regime and imperialist ambitions into proper perspective. It is well worth reading in full.

He writes about the conflict in the Ukraine in the context of Putin's attempt to create an authoritarian, anti-democratic and fascistic Eurasian Union to confront the European Union. The anti-gay laws have to be seen in this light too as "the exploitation of sexual politics is now to be an open weapon in the struggle against the “decadence” of the European Union."

So what are the democracies doing about this? Allowing Putin to help wreck Syria and giving Russia the World Cup. This is not encouraging.
Posted by The Plump at 1:21 pm 1 comment:

And now Swinton are back as the Championship kicked off yesterday. 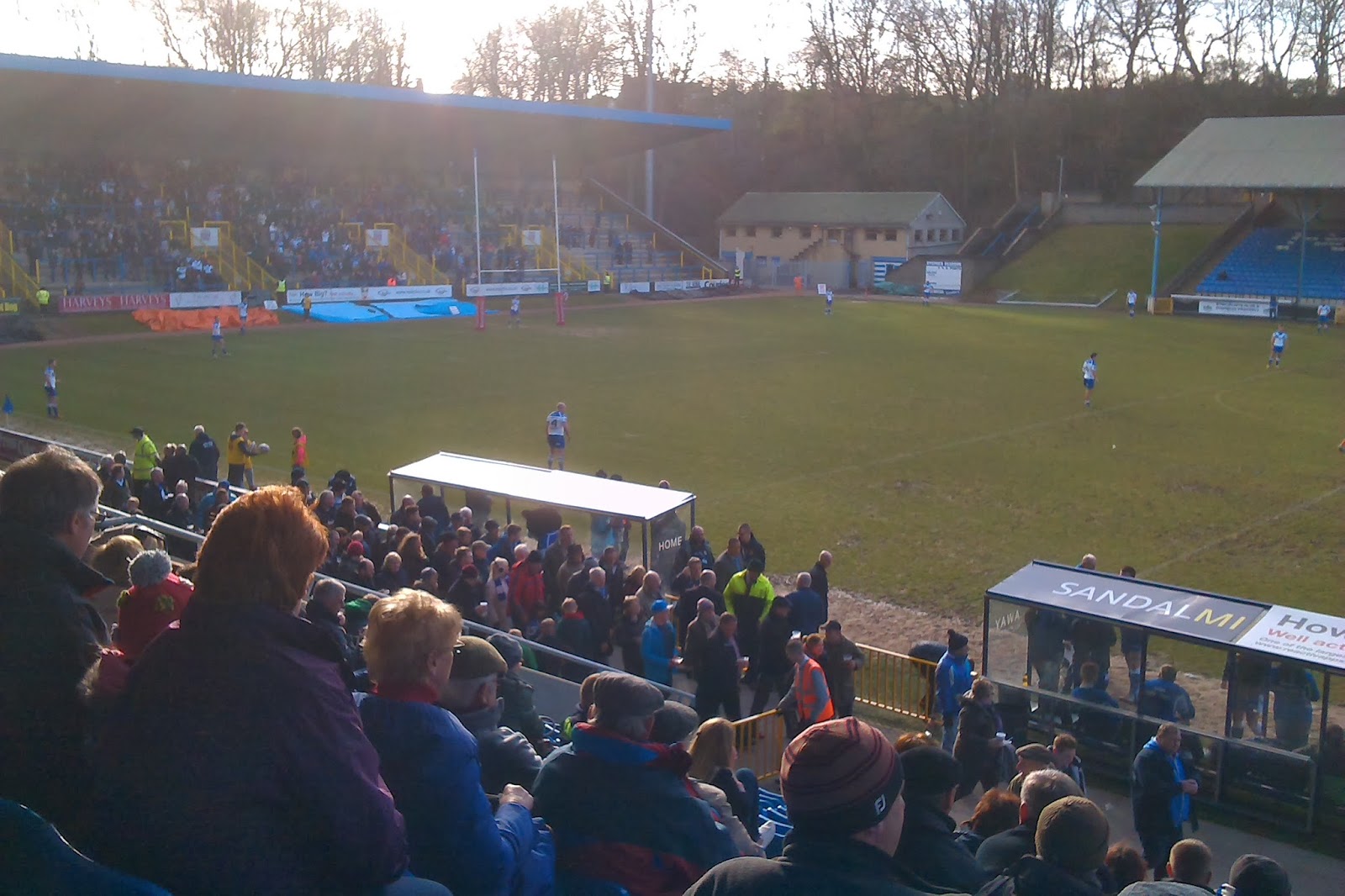 It was a chance to sample the delights of Halifax. Curry pie with mushy peas, washed down by a light, organic bitter. A creditable 28-18 defeat away to a top team earned the Lions a bonus point. It was a bright day as well. Now it is a case of waiting for the takeover. Will it happen? If it does, the future is much brighter after many years of exile and decline. Without it ...
Posted by The Plump at 2:51 pm No comments:

"Shove it up yours"

So the BBC has been forced to apologise for getting too partisan in their commentary on the Winter Olympics. Over the top?

This is how it's done (lifted from comments below with thanks)

The no state solution

Me in Fathom on a short biography of Emma Goldman.
Posted by The Plump at 2:44 pm No comments:

The rugby league season began tonight with a home defeat for Wigan. What other sport is unpretentious and humorous enough to do a sponsorship deal for their referees and touch judges with Specsavers? Welcome back.
Posted by The Plump at 11:09 pm 2 comments:

Even by the Guardian's habit of publishing nasty apologetics for the unforgivable in the name of some spurious balance, this is particularly vile.


No country likes being lectured to, especially when that criticism is so often seen as disproportionate and ill-informed. Russians are no exception, and the all too common anti-Russia rhetoric coming from the west over issues from gay rights to Syria and Pussy Riot has fostered a sense of national persecution.

Yeah, right. Now f***k off and watch this about real persecution:


Gay and Russian: 'It's hunting season, we are the hunted'

Reading this account of the alleged use of collective rape as a village punishment in West Bengal brought to mind an excellent student essay that changed the way I thought. I used to teach a module at Hull on anarchist history. I had described Gandhi's idea of an independent India as a network of self-sustaining village republics to one group in a thoughtlessly uncritical way. Gandhi saw the village as essentially non-violent and the heart of India. Similarly, Tolstoy romanticised the peasantry, seeing honest rural labour bringing wisdom, gentleness and harmony with nature. My student, a British Asian, chose to write on Gandhi, but instead of being reverential, he took apart Gandhi's rural romanticism. And he used village 'justice' to demonstrate how rural self-governance can be cruel, violent and misogynistic. Instead, he argued that a centralised legal system was necessary to ensure the respect of human rights. I read it and thought, "yes, you're right". He got a very good mark.

This evocation of rurality as utopia is very common in parts of the radical left, especially those who never had to actually work on the land. There is a very recent example here in this unusual profile of the patrician leftie, Pete Seeger, re-circulated in the wake of his death. Seeger is recorded as saying:

The one problem with this is what actually happens in small villages. The victim in the collective rape case is described as, "a young woman who was unable to accept the stifling claustrophobia and crushing poverty of a rural hamlet."

Of course, the ruralist left envisaged their utopia as abolishing rural poverty, but the claustrophobia remains and it is the city that offers the prospect of liberation.

This is why the best of the writers of the 19th and 20th century embraced both the urban and the rural, seeing them as mutually dependent. They hated industrial exploitation in the modern city equally with feudal oppression in the countryside. Eschewing both utopian urban modernism and nostalgic rural fantasy, people like Kropotkin, Reclus and Geddes developed libertarian ideas around a concept of human ecology within the natural and built environment, celebrating the city as the source of human advance, but always in partnership with the wider rural region. Humanity is as much a part of nature as it is capable of transcending it. The city gives us liberty, whilst the country gives us peace and, of course, food.

I love slipping into Greek rural life. I find the landscape aesthetically intoxicating and the wildlife fascinating. I enjoy the company of the villagers and the smallness of the world. And when I am away I miss the companionship of my grand collection of feral cats. At times it is blissful. But it isn't perfect and I also love the pleasures of the city; the concert halls and football stadia; the bars and restaurants; the great libraries; the exhilaration of crowds. This is the dichotomy that the radical poet Walt Whitman wrote about in, Give me the Splendid Silent Sun. I am lucky at the moment, I can enjoy both.
Posted by The Plump at 4:11 pm 1 comment: