Here are two quotes from Fintan O'Toole's marvellous new book, Heroic Failure, about the cultural underpinnings of the politics of Brexit.

On the lies of Boris Johnson:


... Johnson was bound to fail. He embodied a fatal flaw in the Brexit project: the self-pitying grievances that it was designed to address could not in fact be addressed. Why? Because they did not exist. (p.136)

And on the creation of the EU as an imaginary oppressor:


The problem is that the whole gesture is based on something imaginary: an enormous overstatement the power of the EU in the governance of England. (p.192)

Trivial complaints (like bent bananas), which would have been of no significance even if true, were fabrications that allied with a picture of the EU that was false, to create a radical solution to non-existent problems that would cause very real problems that are long lasting, deeply damaging, and could not be easily remedied.

It's mad. Utterly mad. And O'Toole captures the insanity with exquisite wit and perception, it's a book that is as funny as it is tragic. Read it.
Posted by The Plump at 8:30 am No comments:

Left out to dry

Two things caught my eye in the Brexit news and both were more thought provoking than the continuing bloodbath in the Conservative party.

The first was Corbyn's TV interview and reports of today's speech to the CBI. Once again he stated quite clearly that he favours Brexit. As he has done ever since the referendum. As did Labour's election manifesto. As he has done consistently over the past forty years. Will someone finally accept that his position is not a fudge, uncommitted, or cautious triangulation. His line is that he would renegotiate a "better Brexit." This is a fantasy. Most of what he said is nonsense.

His Brexit includes a very welcome policy of investment, but he intends to do it while simultaneously sharply reducing the national income. He would stay in a customs union, but this alone will not prevent a hard border in Northern Ireland as he has suggested it would in the past. He intends to swap membership of the single market for access to the single market. This is changing our relationship from owner to customer, a big reduction in power. He opposed freedom of movement and wants to avoid state aid rules, but we would be tied up in the far more restrictive rules of the WTO. I could go on. The main point is that all the things he said he would like to do are not just possible from within the EU, but would be easier.

The second is the ongoing investigative reporting into the funding and transnational links of the leave campaign, recognising it as part of a far-right network. This network is funded and run by the super rich who appear to be annoyed by the the fact that they have restrictions on acquiring even more wealth and that the wealth they have hasn't given them the power they think they deserve. Forget all the talk about the 'left behind' and the 'will of the people,' they don't give a toss about them. These people are kleptocrats, not democrats. Left leavers are buying into some of this guff and helping to facilitate their pet project.

There may be some more civilised, and probably deluded, fellow-travellers in the Brexit elite, however, their main aims coincide. They want to crush the left and dismantle the welfare state. Brexit is a revolution, not yet a complete one, though it is the first step in removing a major institutional hurdle - the EU. If any leftists think they can achieve their nationalist socialism (hopefully with the suffix in place) against this mob, dream on. Your defeat is assured. They know what they are doing.

Two thirds of labour voters voted Remain in the referendum. The signs are that this figure is higher now. Around 80% of Labour members are Remainers. We know that the demographic future favours Remain, with between 70 and 80% of people under twenty-five in favour of Remain. All the polling evidence points to a Remain majority in the country. Left leavers are abandoning the majority to support a reactionary revolution. They are for the few and against the many.

Brexit will hurt the poorest. Poverty in Britain is down to the policies of British governments, not the EU (who have at least tried to mitigate it through structural funds). Making the country poorer is not the way to remedy poverty. There is only one position for a leftist to take - stop Brexit. Not improve it, not accept May's exit agreement as the least worst option, stop it completely.
Posted by The Plump at 11:44 am No comments:

Gosh! Look at what we would save. 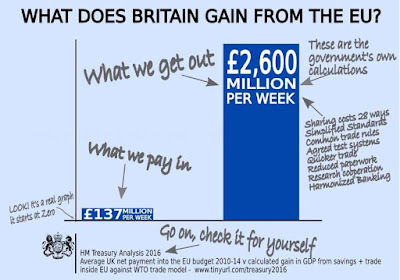 Why on earth are we doing something so suicidally stupid?
Posted by The Plump at 11:39 am No comments:

All history is selective. Good history is based on how that selection is made. It's not easy and that's why there is always debate about interpretation. History is not a catalogue of events, it's an ongoing investigation. However, there is a process of selection that is not about intellectual inquiry, but falsification. It forces history to conform to a pre-existing narrative.

One of the most prominent features of arguments for Brexit is an historical narrative that is fundamentally mistaken. I don't know whether it is the result of half knowledge or deliberate manipulation, but it is plain wrong. It has to be because it is based on two completely contradictory notions. The first is the greatness of Britain and the British Empire and the second is that Britain is the plucky underdog - a country that celebrates its defeats as much as its victories. I'm sorry, you can't be a mighty power and an underdog at the same time. This oversimplification and mythologising of history is wholly misleading rhetoric. It is part of a desire to ignore reality. Misreading history is a neat way of averting our gaze.

The most common trope dragged out is "our finest hour" when we "stood alone" against the might of Nazi Germany. The message being that we are an exceptional nation of courageous fighters who will triumph against the odds. Except we were not alone. We had the Empire, we were being supplied by the USA through lend lease and the Atlantic convoys, and Britain's determination to fight on was a holding operation until America could be brought into the war, or as Churchill put it in his fight on the beaches speech, "until, in God’s good time, the New World, with all its power and might, steps forth to the rescue and the liberation of the old." The speech was part defiance and part supplication. Britain could never have prevailed alone.

Hitler's invasion of the Soviet Union and declaration of war on the United States gave Britain the powerful alliance it needed. But also standing with Britain were the resistance movements of occupied Europe, the Czech and Polish pilots who flew in the Battle of Britain, the Jewish brigades that fought with the British Army, and many more including all of Europe's democrats. Britain was never alone, but for a time it stood at the head of an international anti-fascist alliance. We should never submerge that fact under a nationalist mythology of British exceptionalism.

It was this alliance that was the basis of the post-war settlement. Outside the Soviet block it rested on a number of principles. Democratic governance; welfare states; American commitment to the defence of Europe; accountability for war crimes under international law; a commitment to human rights; and finally the moves towards some form of practical European unity, embodying those basic principles.

Each and every one of these placed limits on national sovereignty. They were meant to. But the reason why the settlement was so successful is because there was no attempt at some form of utopianism. Instead, it found a way of accommodating national sovereignty within a legal and economic collaborative framework based on common interests and citizens' rights. Its aim was to tame nationalism, not abolish it.

This is what Brexiters paint as a hostile imperial yoke that we must throw off, described in whatever manner suits the ideology of the speaker. Not only is this wrong, it's preposterous. It's a fabrication with no understanding of reality. What's worse, there is an unpleasant smell in the air. It's the stench of authoritarian nationalism. It's different to the 1930s. It rarely seeks to describe itself in terms of some global ideology, instead it tries to harness racism and conspiracy theories as cover for kleptocracy. That doesn't make it any the less dangerous though. And in leaving the EU we are damaging the very institutions we need to contain these new, murderous forces. Only the Putins of this world will be happy.

The only, and I mean only, benefit to Brexit is that all other nations have looked at our stupidity and decided that they aren't going there. Polling suggests that support for the EU is at one of its highest points in most member states - including Britain! It's getting clearer that if we do leave, then we will do so not only in opposition to a pro-European movement that can bring 700,000 people onto the streets, but also against the wishes of the majority of the population. But still we press on with this ludicrous act of national self-harm, making ourselves poorer, and stripping the British people of precious rights. And for what? All we will gain is mountains of extra bureaucracy.

This anti-EU narrative is a ridiculous fiction. It is deluding us into making a mistake of staggering proportions. In the days after Remembrance Sunday, we are reminded that we are voluntarily and unnecessarily giving up the gains that came from that collective sacrifice. It desecrates the memory of the courage of that generation. Britain cannot survive without allies and now it is leaving its most important alliance. It's madness. History is a great teacher, but bad history is the worst dissembler of all.
Posted by The Plump at 8:20 pm No comments: