You kip if you want to

The media are getting far too excited than is good for them. They have been in a frenzy over UKIP for months. Last week the local election results were reported as a surge of support for UKIP. Given the wall-to-wall coverage and stunts like Nick Clegg's amazing act of stupidity in agreeing to debate Farage on TV, it wouldn't be surprising if there had been. There is only one problem. UKIP gained 22% of the vote in 2013 and 17% in 2014. They had lost support. This should have given pause for thought, but it didn't. Commentators were saved by the European election results, with UKIP topping the polls with 27% of a very low turnout. The media breathed a sigh of relief and their big political story lives on, until they get bored with it that is.

That story isn't as simple as portrayed. European election results rarely correlate to votes in a general election and they hugely over-represent fringe parties. Think back to the last time. Then, it was the BNP that was the talk of the town. Two fascists were elected. Everyone got very excited. Nick Griffin was invited onto Newsnight. This year they were wiped out.

Analysis and reporting has also been lazy (at best) when looking at the figures. In the local elections UKIP lost votes but gained seats. To sustain the narrative, the share of the vote was ignored and the gain in seats highlighted. But the media was keen to paint the elections as a failure for Labour, so in their case they concentrated on share of the vote (the largest, but not enough to win a general election), not on the more than 300 seats gained. The problem of using seats to gauge popular support is that their distribution often reflects the crankiness of the electoral system, rather than share of the vote. Any meaningful comparison has to look at the share of the vote alone.

If you do this, then things look a lot more interesting. Britain seems to be becoming a much more multi-party polity. This will create all sorts of anomalies at the general election as first-past-the-post is poor at giving representation to smaller national parties. The electoral reform debate is not going away.

The second thing that is obvious is that Labour is recovering, pretty slowly, but improving all the time nevertheless. The only two parties that have gained are Labour and UKIP. It is just that nobody seems interested in talking about Labour. Also on the left, there is the continuing support for the Green Party. They are holding their place too.

The Liberal Democrats certainly should be worried, their support is melting away. UKIP is not helping the Conservatives either. They face the prospect of a divided right. The major parties are pretty resilient. I remember back to the times when the SDP was supposed to be the new force that would supersede Labour. They didn't but they did divide the left, leaving the way open for big Conservative majorities. UKIP will not replace the Tories, but they can lose them seats in marginal constituencies.

After the banking crisis and the politics of austerity, some polarisation is apparent. This time the main challenge is coming from an embittered right, itching to be nasty once more. UKIP is its latest indulgence. Certainly they represent an unlovely and authoritarian suburban insurgency, but a new force in British politics? Don't hold your breath.
Posted by The Plump at 1:49 pm No comments:

The unexpected can sometimes be an integral part of the familiar. An old friendship regained means alcohol-fuelled conversations filled with nostalgic reminiscences of shared times, whilst eagerly taking advantage of the missing years by retelling favourite stories to the only person in our social circles who hasn't heard them a thousand times before. But then the person we have become is not always the same as the person we were. What of this new friendship, this time one between an academic writer and a playwright, neither of whom we had known before? How would that work out? This surprise was put to the test last weekend.

Tim writes comedies. Only serious topics make worthwhile comedy. The first play is about three dogs in a dog rescue centre. Like all anthropomorphic writing it is really concerned with the human condition; homelessness, despair, aggression, cynicism, survival, love, and the increasingly pressing need of middle aged males for a pee. There is care and respect for animals underneath too (Tim was always mad about animals and was the only friend I ever had at school who kept a plastic tub in his lean-to containing pet mud leeches). Except he makes you think about them - differently - subversively. Animal themes invite sentimentality and kitsch, not the perception and dark tenderness evoked here. There are jokes and they are funny, but it is the tenderness that makes you smile.

The second play, Bare Words, is a dialogue between one person. It is about the agony of writing and the role of seduction in art. All writers will identify with it instantly. Others will enjoy it too, even if they come out with a vague sense of horror about what really goes on in an author's mind.

Tim's writing is accessible, intelligent and witty. A word should also be put in for the excellent cast and production, but it was the writer that concerned me. And I feel rather proud to have such a new old friend.

Anyway, go and see them if you can. There is a YouTube taster below.

One of the things that I keep reading about the rise of the UK Independence Party is that it appeals to angry people. This is OK as far as it goes, but the sentence isn't complete. No, UKIP appeals to angry people with bugger all to be angry about. It isn't tapping into real deprivation or discontent, but suburban self-pity. So I was pleased to come across this article about the same phenomenon in the United States.

Kathleen Geier skewers a piece of conservative resentment by Tal Fortgang that seems to have gone viral in the States. She is deliciously contemptuous:


Fortang is a college freshman, after all, and it reads very much like the kind of thing a young, upper middle class, white dude with a pretentious vocabulary (see: “Weltanschauung”) and no experience in the real world would write.

But her real points are about the way it was taken up by a fawning press and by the author's of denial of privilege and claim to victimhood. This is a common trick, she writes:


... today’s plutocrats face a huge obstacle: they have struggled with zero major obstacles or hardships in their lives. This makes it very hard to craft biographies and stump speeches that can make the candidate relatable to the average Joe and Jane Sixpack. What to do? The answer, it seems, is to wheel out the grandparents. Cue the violins.


They are madly envious of women, people of color, sexual minorities, and the poor for whatever public sympathy they get for their suffering, and they desperately want in on the action.

The difference in the UK is that you don't have to dredge up any evidence. You just have to pretend.

The whole narrative doesn't just rest on scapegoating or blaming the victims, but on the bizarre claim that the privileged are the real, authentic victims, despite their easy, lucky lives. It is a political discourse based on the grumblings of saloon bar bores, complaints that everything is going to the dogs, together with a sense of peeved indignation that they haven't got even more. What a waste of their lives. Why don't they just enjoy themselves?
Posted by The Plump at 6:33 pm 2 comments:

Sometimes I wonder about editorial standards. But when I read the Guardian, I abandon all hope at all. If I had received this article as an undergraduate essay, I would have failed it. The Guardian published it.

It would be easy to fisk the piece, but I have a life. Perhaps the most irritating bit is this:

Actually no, it means preventing someone else flying and bombing. For example, it was the no-fly zone established over Northern Iraq after the first Gulf War in 1991 (remember?) that saved the Kurdish people from Saddam's genocidal suppression of their uprising. It was an achievement that has made John Major into a rather unlikely national hero for the Kurdish people.

Instead, the tactic of a no-fly zone is presented here as a capricious excuse made by someone who just likes bombing "people we don't like in the Middle East" for the hell of it (with no attempt to address the reason why we might not like them). Strip actions from context and meaning and you lose precision and all connection with reality. And this obfuscation is in a column about the clarity of language! As for the bit about Syria ... stop it, I have had enough.

I am prone to making big speeches about the difference between cynicism and scepticism. Scepticism is wholly to be welcomed and is based on evidence, investigation and critical thinking. Cynicism is a posture. It is a generalised mocking stance, one that is inherently conservative. That might sound odd, cynicism often has a radical sound. Yet it answers the question, 'what can we do', with one word; 'nothing'. It is a recipe for paralysis and posing. This article is pure, rampant cynicism.

Sceptics see realities with all their risks, complexities and obstacles. But they don't relapse into fatalism. They believe that something can be done. And on occasion that may mean using military force to stop genocide. Cynicism is the fashion of the moment and I wonder how many lives this bien pensant sneering will cost in the long run.
Posted by The Plump at 2:08 pm 13 comments:

Who would have guessed?
Posted by The Plump at 12:49 pm No comments:

Thanks to Snoopy for this translation of a must-read interview. A snippet:


...Putin is a thug, in classically conventional sense. He "sees everyone in a coffin" and he does not care for the consequences. And not because he's crazy, absolutely not. It is just that they all were that way in the KGB. And the people who are around Putin: Sergei and Viktor Ivanov, Sechin - are exactly the same. 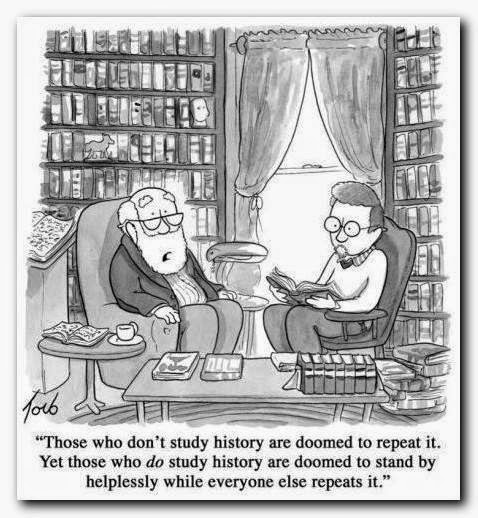