It's a bittersweet New Year.

Here in Pelion, the weather is glorious, but we are under a strict lockdown because of the pandemic. The world is holding its breath, waiting for the vaccine.

And the UK has Brexit. The New Year signals us leaving transition and entering into a hard, hard Brexit that bears little or no relationship to what the Leave campaign promised during the referendum.

Brexit has turned my life upside down. I had to become a Greek resident before today to be protected by the Withdrawal Agreement. It's odd to be told by my own government to emigrate or lose my rights and it's not what I had planned. But it's worked out well for us, in a beautiful place, with wonderful friends and neighbours. It's a piece of paradise. It's brought happiness and there have been times I have been overwhelmed with the kindness that we have met.

We are the lucky ones, retirement made it possible. But I can't forget the people I know who have lost their job or had their careers ruined because their freedom of movement has been taken away. Nor can I forget the restricted futures of younger people, the businesses facing large increases in bureaucracy and costs, the loss of the European Social Fund and regional aid helping the most deprived, the list goes on. And I can't forget my native country, to my mind making the worst mistake in its post-war history. EU citizenship meant more to me than just the conveniences, rights, and liberties it conferred. It was part of my identity and losing it feels like a bereavement.

But I was in time to rescue my Greek life. Good things are happening too, for friends and family. There is sweetness to alleviate the bitterness of the awful year 2020.

So, to all my readers, friends and relatives, I hope that 2021 brings sweetness for us all, even though I feel for the victims of this awful pandemic and fret about the future of the United Kingdom. How I wish we had settled for being a nice country with a crap climate, collaborating with the rest of Europe, rather than trying to be ... well, you tell me.
Posted by The Plump at 7:53 pm No comments:

We have a disgusting government. We have an even more disgusting and complicit right-wing press. I am not sure that they are wholly sane.

What can you say about this?

Untrue, obviously. Racist, certainly. Deeply offensive on so many levels - Kristallnacht, Merkel as a Nazi, Britain, even more offensively, compared to the Jewish victims of the Holocaust. And it's about the bloody war. Give it a rest. It ended seventy-five years ago.

We are in this mess partly because of decades of blatant, deliberate lying about the EU by these papers. Years and years of relentless nonsense, twisted interpretations, and invented drivel. It has found an audience, made money, given Johnson his career, and cost the country its place in Europe. It also tells you everything you need to know about Brexit.

Brexit was only about breaking things. True, it subscribed to the old revolutionary slogan about destruction being creative, of a new Britain emerging unchained by those tiresome reciprocal obligations that brought us wealth and security, but they never bothered to tell us how. There was nothing as messy as a programme or a plan. No, every piece of Brexiter propaganda was based on one thing - hatred of the EU, often insane hatred. Just like this piece.

I'm back in Greece. Brexit has forced me to choose to become resident here before the end of transition. I'm a Brexile. I got back early, getting a flight the day before the UK lockdown and, as it turned out, only a few days before a much tougher Greek lockdown. And then there was the unexpected. A feral dog gave birth to puppies and brought them into our garden. A local animal charity got involved and we rescued them. The local kennels were full, so the option was that they would either be housed in a room provided by a local hotel owner, or we could build a pen in our garden for them until they could be adopted. This is the result. 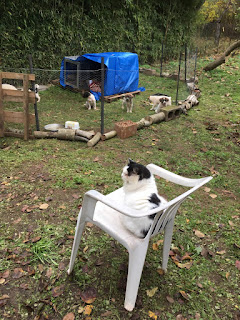 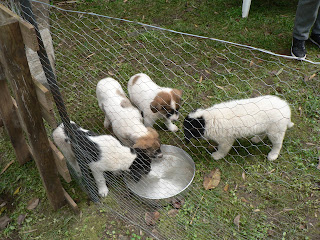 There are six of them. All but one has been found a home. They will move after the next round of injections. And they will be spread all over Europe.
The people involved in the rescue and rehoming are Greek, Dutch, Italian, German, and us. It's a European Union in microcosm. Brexit is seen as being all about trade and sovereignty, about international relations and economics. We forget the micro level, people of different nations living where they want and organising themselves to do things as small as rescuing a litter of Greek puppies. Freedom of movement was its triumph. And we have a government that is proud to have removed it, restricting British citizens' rights. Institutions matter. The EU, where it fails can be reformed, but a void is a void. A pile of rubble is no use, it has to be rebuilt. Britain has chosen demolition without reconstruction.
Brexit is a national folly, and the attitudes behind it are a national disgrace.
Posted by The Plump at 9:27 am 1 comment: