Stop mentioning the bloody War - please. Brexit is not the same thing - at all. Rhetorical analogies are not history, nor are they a guide to the present. So, what on earth is Timothy Garton-Ash going on about here?

Agreement, or even no agreement, with the EU is not "punishment," it is what is legally possible as a consequence of the British 'red lines,' our request to become a third country, and what is acceptable to the other twenty-seven national members. It is our choice, the consequences are the result of our actions.

And as for "Weimar Britain," good grief.


Am I exaggerating the danger by even hinting at a comparison with Weimar Germany? Indeed I am...

Well don't bloody do it then.


But it’s surely better to overdramatise the risk, to get everyone to wake up to it,

No it isn't. It's utterly misleading.


... rather than do what most of our continental partners have done for the last two years, which is consistently to underestimate the dangers for the whole of Europe that flow from Brexit – especially a mishandled Brexit.

Heaven forbid it should be mishandled after a week when, as Ian Dunt summarises perfectly,


The government had backed an amendment against its negotiating posture so that it could make its own Brexit plan illegal. It then whipped MPs to oppose an amendment supporting its white paper and had to rely on the votes of Labour MPs to defeat itself.

Then there's the Irish border, you know the one that led to the deaths of 3,500 people. The EU made preserving an open border a condition of any agreement. Britain agreed a backstop to prevent a hard border in December. Having signed up to it, May declared that no Prime Minister could possibly accept it, despite having accepted it. Then, in Parliament, supported an amendment that:


... made it unlawful to pursue a policy which would create a separate customs territory between Great Britain and Northern Ireland, even though this is precisely what the withdrawal agreement with the EU will do. Now this will presumably have to be repealed before any agreement can be signed. Rarely before have governments passed laws they intend to repeal before they have even reached the statute book.

In the face of that, what is the EU supposed to do? Perhaps what it is doing, planning and investing in the infrastructure necessary to deal with the consequences of Brexit for them, rather than humouring us and offering to break its founding treaties to give us the impossible we demand. This is what Garton-Ash calls underestimating the dangers.

We haven't really moved on from this, have we?

Please, please don't use inappropriate historical analogies, especially about the Second World War. It doesn't help and tells us nothing about the pickle we are in. And while we are about it, don't mention the Holy Roman Empire either.


I’d also recommend a history of the Holy Roman Empire. That earlier European Union lasted so long because it proved capable of adapting to changing circumstances, living with Europe’s ineradicable diversity and complexity, while still maintaining its central purpose and mystique.

Oh lord, please make it stop.
Posted by The Plump at 10:51 am No comments:

Destroy the party or destroy the country? One year later, it is a testament to the extraordinary political skills of the government that it appears to be doing both.
Posted by The Plump at 8:41 am No comments: 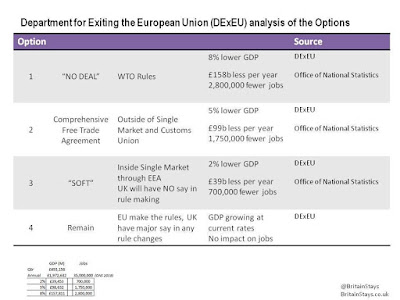 The people are being asked to make huge sacrifices. Millions of lives are being changed for the worse, irrevocably. Being one of the most influential and powerful members of the European Union must have turned Britain into a dystopia of oppression and suffering for us to want to endure such pain so that we can leave. The past forty years of bent bananas must have been hell on earth. It's funny that I never noticed. Did you?
Posted by The Plump at 10:25 am 1 comment:

There is some debate amongst the politically minded as to whether Labour would have a strong lead in the polls if they backed remaining in the EU. There is counter evidence to suggest that it wouldn't make much difference. Personally, I don't give a toss. Brexit is now an issue of principle. Leaving the EU threatens the standing of the nation and the livelihoods of millions of the people that Labour was founded to protect. This is a great existential test. If Labour, a pro-European party with an overwhelmingly pro-European membership, and a voter base that voted by more than 60% to remain, cannot speak firmly and unequivocally in favour of our place in Europe who will?

At the moment no objection is coming from the Party's leadership about Brexit itself, they merely attack the way it is being done. They have plenty to go on, especially this morning when the government has legislated against itself. But their vague promises of a better "jobs first Brexit" are meaningless and impossible. It is time to start telling the electorate the truth. Brexit is a fantasy. It is unachievable and undesirable. Britain faced reality in the 1970s. It explicitly and openly recognised that its economic and international decline was linked to its loss of a world role and its inability to be an independent superpower. It chose a European future. This was both a pragmatic decision, recognising that it was in Britain's interest to be a member, and an idealistic one, committing Britain to the idea of developing European integration and cooperation. Britain chose wisely. It is still the right choice.

There were always opponents, political obsessives on the right and left, who were perfect illustrations of what William Davies calls "radical incompetence," the triumph of sentiment over the actual practicalities of governing. Brexit is a slogan without a strategy. Over time it became the hobby of people mainly on the right of politics. Its advocates were wealthy individuals insulated from the consequences of their actions, whose indignations were bolstered by fictions, and who were comforted by  the certainty that they would never succeed and have to face the reality of what leaving the EU actually meant. However, they were joined by others who did know what they were doing, the proto-fascists of the alt-right. They understood that their political goals, and those of their overseas allies, could only be achieved through disruption and the dismantling of the post-war order. They are ruthless. And it is this alliance that has led to the official leave campaign, the one containing cabinet ministers, to be referred to the police.

The government is on a unique path. As Fintan O'Toole noted, Britain has "gone into international treaty negotiations hoping to emerge with a status greatly inferior to the one it already enjoys." As the government blunders, the risks of no deal are rising - read this to understand the consequences. It's late, but surely now a party of the democratic left must stand up for its foundational principles. It's time for it to vehemently oppose the charlatans and fantasists of the right of the Conservative party. It has to call out the sinister far-right anti-democrats. It has to stand for internationalism. It has to protect the living standards, jobs, and rights of the ordinary people of this country. And with the latest opinion polls showing 80% of those under 24 favouring Remain, it should speak to the future, a European future.

The quality of the political class is risible. It isn't just their lack of competence, nobody could implement Brexit without making a huge mess, it's more to do with their cowardice and mental dishonesty. Faced with facts, they bluster. When business and trade unions alike tell them what the difficulties are they are ignored or insulted. Objectors are told to "believe in Britain," as if reality can be overcome by faith. The history of this disastrous episode will be written one day. I hope that I will be around to read it. Future historians will not be kind. If Labour stands on principle and fights Brexit, it may shed some support, it may even lose, but at least historians will not include the Labour Party and its leadership amongst their list of "Guilty Men." And if the record shows that Labour stood and fought on the right side of history, British democratic socialism will have a future. I fear for it otherwise.
Posted by The Plump at 12:16 pm No comments: