Labour shadow cabinet ministers have been talking to the media, all pushing the same message that Labour in power will never reintroduce freedom of movement - in the middle of a crisis partially caused by the ending of freedom of movement - when polling shows popular support for freedom of movement running at over 60% - when immigration has never been a less salient issue - and without mentioning that it's a reciprocal right that benefits us as much as others. It's gesture politics, another version of Ed Miliband's anti-immigration mug. That was a huge success, wasn't it? My tip is that if Labour wants to be populist, it should choose something popular, not something that will dismay most of its voters to appease a fictional notion of an atavistic working class.

In doing so, it has solemnly pledged:

1. That Labour will never again be a member of the single market, let alone join EFTA or rejoin the EU, whatever the economic advantages in doing so.

2. That Labour will maintain barriers to trade and hard borders with our largest and nearest trading partner and supplier of food, regardless of any damage to the country.

3. It will ensure that any closer relationship with the EU will be limited and that we will negotiate with them from a weak position. It rules out a future relationship like Switzerland's.

4. It promises not to restore the rights that British citizens had removed from them by Brexit.

As a result, Labour stands with the old against the young, and for nostalgic nationalism against progressive internationalism. To do that, it will sacrifice future prosperity. It is standing for hard Brexit. This is a curious position for a party with an overwhelmingly pro-European membership, when a huge majority of young voters loathe Brexit, and when polls consistently find that a majority think that Brexit was a mistake - despite the lack of political leadership on the issue.

Do they understand the full implications of what they are saying? I don't know. They have backed Blue Labour over New Labour, and are ignoring a whole range of alternative traditions that should be part of social democratic renewal. It's an unimaginative dead end.

Brexit was a mad idea that threw down a challenge to the political class. They have failed it, totally. And even the current mess is not forcing a rethink. As for me, I have my permanent Greek residency. I am the last generation to salvage something out of the wreckage. For every one else, some freedom of movement will still exist, but only for the rich.

From the National Resistance Front of Afghanistan. Women demonstrating in Kabul against the Taliban.

The demonstrations were dispersed, but this was one response to the call for a 'national uprising' by the resistance.

I was broken when I first heard the Taliban took over but I told myself I shouldn’t give up my fight for my rights. I decided to take to the streets with about 40 or 50 other women & publicly challenge the Taliban. No fear, now we are united. 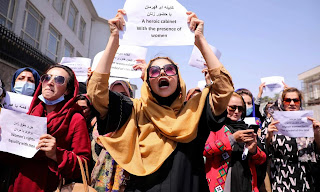 This is the reason why history does not repeat itself.  For all the imperfections of its democracy, twenty years of building a civil society brought hope, experience, and activity. Nothing can be turned back to how it was. The Taliban have seized a changed country that doesn't want it. Most people will seek to survive, a few will collaborate, but some will resist. The future is unpredictable, but I am in awe of the bravery of these Afghans in the face of brutality after being betrayed by allies.

Liberty and equality in modern liberal societies is worth defending or winning - in Afghanistan as in Belarus and elsewhere. When rights are taken away, people will struggle to regain them, even at appalling personal cost.