The politics of fear

There is one narrative being rolled out far too often these days, and that is that cancelling Brexit will cause civil unrest or lead to the rise of the far right. Let's look at the empirical evidence.

First, it's true that the far right are organising around Brexit (something that should give Lexiters food for thought) and they have managed to stage a demonstration in London. Around 3,000 - 5,000 turned out, proving their anti-European credentials by wearing French-style yellow jackets! They were met by 15,000 counter demonstrators. Anti-Brexit campaigners managed to get 700,000 on the streets. If you want an indicator of the respective strengths of the grass roots movements, this is probably a good indicator.

OK the Brexiters were nastier people than the pro-EU crowd, none of the second referendum campaigners were carrying nooses, but there are no more of them than would turn out for an EDL march. Leaving aside the cowardly argument that we must give fascists everything they want in case they are nasty to us, the idea that there would be civil unrest is risible.

While there are far more organised Remainers, they are still a minority, though a larger one than Leavers. I can't see much evidence that the rest of the people are anything other than semi-detached, uninterested, and not that knowledgeable. Where they have taken a position, it's not strongly held and cancelling Brexit would cause little more than a wave of grumbling. The EU was a low salience issue at every election until the referendum. It was only important for a small group of obsessives. There was no big demand for leaving, or even for the referendum itself. The only way Leave could win was by disingenuously linking the EU to higher salience issues and campaigning on them instead - immigration and the NHS. (Well, let's face it, the slogan 'you might lose your job' isn't really a vote winner.)

So where does this fear of unrest come from? Partly it's another dodgy Brexiter argument, but it's also tied into a deep historical tradition - fear of the mob. Whether we are talking about collective bargaining through riot, revolutionary passions, or the jingoistic "King and Country" mob, violent unrest was widespread in the 18th and 19th century. Today, it has left a folk memory of deep prejudice about the working class. The workers are dangerous and must be repressed or appeased.

From Blue Labour to Brexiters, these fears are stoked. We must scrap the basis of all our trade, bankrupt small businesses, undermine the foundations of our foreign policy, make ourselves poorer than we would have been otherwise, strip people of their rights, damage public services, break up families, give away power to regain a nominal sovereignty that can never be used, humiliate ourselves as a nation, etc., because if we don't, there will be 'trouble at t' mill.'

I will let you into a secret. Working class people are actually people. They are all ages, come from all ethnicities and nationalities, and they have a brain. Yes, they can actually think, especially if you bother to talk with them. Believe it or not, they are not all mouth-frothing xenophobes. And here's another secret. They didn't all vote Leave. Some did, but the bulk of the vote came from prosperous elderly voters in suburbia and small market towns. The prospect of rioting pensioners in Weybridge doesn't keep me awake at night.

What this highlights is how the referendum was a failure of democracy. It was a marketing exercise amongst people -  Leavers and Remainers, middle and working class - with little real understanding of the technicalities and no great attachment to the result. The mass of people have switched off now as well. Those wanting to 'get on with it,' just want the whole thing to be over so that they can carry on with their lives. Many of those favouring no deal think that it will mean that everything stays the same. There was no deliberation, scarcely any among elected representatives, let alone the setting up of the kind of participative structures needed to produce consultation and informed consideration amongst the wider population.

Brexit is a right-wing revolution borne on a sea of indifference. Fear of the mob is one of its last lines of defence against reality.
Posted by The Plump at 12:23 pm 1 comment:

It's time for a pretty picture of Greece to relieve the angst. 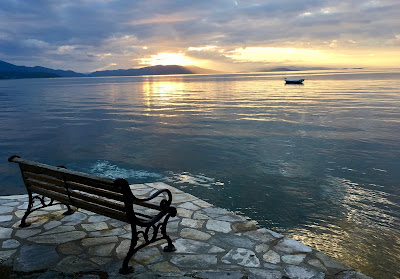 It's what you have to turn to. Write about politics or Brexit? How? It's the theatre of the absurd. I'm stumped. So music it is.

This is described as an attempt to truthfully answer the old John Lennon rhetorical question ‘and so this is Christmas, and what have we done?’