Two of the least impressive political speeches ever.

Theresa May: "Give us what we ask for, or I'll thcream and thcream 'till I'm thick."

It would be comic if it were not for the consequences of two major nations indulging in wanton self-harm, with god knows what collateral damage in their wake.
Posted by The Plump at 12:18 pm No comments:

Europe is freezing. Certainly this corner of Greece was, though the weather is now mild, the sun is out, and the sea of white is giving way to green. 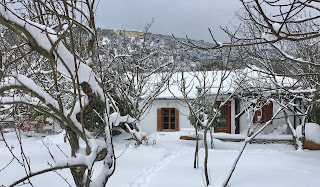 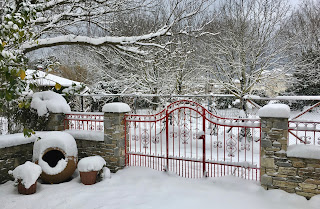 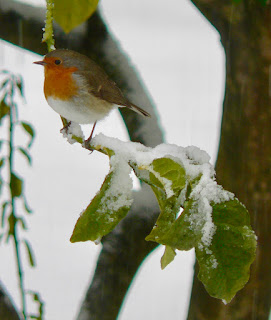 Very picturesque, very Christmasy, but it's supposed to be Greece, and in a house heated by wood stoves, central heating seemed more sensible by the minute. I've never been a fan of cold.

And are we entering a very cold political climate? Brexit and the collapse of the Labour party opening up the prospect of endless Tory government? The rise of populist nationalism? The authoritarianism in Poland, Hungary and Turkey? The bizarre and sickening Putin worship on both the left and the right? And the coup de grace, the most disturbing and dysfunctional president ever to enter the White House? It's a grim catalogue.

Despite all this, I am not a pessimist. This rise is very resistible. It is easy to make a comparison with the 1930s, but democratic societies are more secure and, above all, more prosperous. We have more to lose and have a collective memory of the disasters of the past. Yet it has to be resisted. The far right has not stood still. It has reinvented itself as something respectable, distancing itself from the death camps of the past. This makes the need to oppose it even more urgent. And this is what disturbs me about Corbyn's apparent and confused capitulation to a UKIP-lite agenda and acceptance of a hard Brexit. It seems a curious position to take for a leader of a party that supported remaining in the EU and 70% of whose voters voted to remain. It mirrors the actions of the Conservative Party, and shows that the major parties' approach to UKIP is one of appeasement, not opposition. A hard Brexit on UKIP terms would never have won a majority.

16 million voters are unrepresented by the two major parties. Even if you accept the legitimacy of the result, that does not mean that you have to think and say that it was the right decision. An opposition's role is to organise and, at the very least, fight to protect people's rights and livelihoods as part of a process they oppose. Eurosceptics accepted the decisive result of the 1975 referendum, but they still kept fighting their corner, so much so that leaving the EEC was official Labour policy in the disastrous election of 1983. Why should we now meekly abandon our beliefs and acquiesce in error?

It's a bad mindset for a time of challenge.

To sum up the situation we are in, here are three articles from very different writers, each worth reading in full and each coming to a similar conclusion from a different perspective. First, a review article from the New York Review of Books by Timothy Garton Ash. His conclusion:


...this is no time for freezing. No, we who believe in liberty and liberalism must fight back against the advancing armies of Trumpismo. The starting point for fighting well is to understand exactly what consequences of which aspects of the post-wall era’s economic and social liberalism—and of related developments, such as rapid technological change—have alienated so many people that they now vote for populists, who in turn threaten the foundations of political liberalism at home and abroad. Having made an accurate diagnosis, the liberal left and liberal right need to come up with policies, and accessible, emotionally appealing language around those policies, to win these disaffected voters back. On the outcome of this struggle will depend the character and future name of our currently nameless era.

Secondly, this is a beautifully written piece on Trump from Adam Gopnik in the New Yorker. I thought of Brexit when I read this:


This is what was once called Bonapartism: I won and I can now do anything I choose. Victory, however narrow, is license for all. Autocracy, after all, has always been compatible with plebiscitary endorsement. The point of constitutional government is to make even the victors subject to the rules.

His conclusion is similar to Timothy Garton Ash.


There’s no point in studying history if we do not take some lesson from it. The best way to be sure that 2017 is not 1934 is to act as though it were. We must learn and relearn that age’s necessary lessons: that meek submission is the most short-sighted of policies; that waiting for the other, more vulnerable group to protest first will only increase the isolation of us all. We must refuse to think that if we play nice and don’t make trouble, our group won’t be harmed. Calm but consistent opposition shared by a broad front of committed and constitutionally-minded protesters—it’s easy to say, fiendishly hard to do, and necessary to accomplish if we are to save the beautiful music of American democracy.

And finally, from the left, Michael Walzer writes in Dissent that, "One of the historical tasks of the left in the present period is to help hold the center." He concludes:


In fact, of course, the survival of a vital center is also the precondition of an active left. Never think that “the blood-dimmed tide” is a threat only to immigrants and minorities. It is a threat to all of us: dissidents of every sort, union organizers, left intellectuals, feminists, peaceniks, men and women of conscience, students discovering Marx, teachers who don’t like standardized tests, and journalists who write about the misdeeds of the rich and powerful. We all need constitutional protection; we all need a center that holds. We have to stand in the center and on the left at the same time. That may be complicated, but it is our historical task.

They are right. This isn't the time for timidity.
Posted by The Plump at 1:17 pm No comments: