Most of my recent posts have been about Brexit. Other things are happening as well; like a massacre. It's a massacre that comes after half a million other deaths. It finishes off what was started with Sarin gas in 2013. It is a crime against humanity, piled on top of crimes against humanity.

I don't expect much from our unserious Foreign Secretary or a government consumed by Brexit, but what about the opposition? Labour's Shadow Foreign Secretary has spoken. Last week, she emitted this pile of sycophantic drivel. Genuflecting to the wisdom of her leader, she talks of Syria without mentioning Assad. Not a word about the man who launched the war. Silence about the person whose forces and allies are responsible for around ninety per cent of the deaths. No mention of his prisons and torture chambers. Nothing. Zilch. War without agency.

The piece is anti-interventionist in all cases, but doesn't acknowledge that there are consequences to non-intervention. We are seeing them daily, that is if we can bear to watch the news or read the reports. Mostly, I can't. But I still know that they are there and that it's happening.

There can be very good reasons behind non-intervention. I have friends who I respect who see it as a principle. Others point to the desperate difficulty of intervention in Syria, especially given Assad's allies, and the possible unintended consequences. They may be right, they may not, but at least they are in touch with reality and do not describe the results as 'peace.'

I can't be bothered to fisk Thornberry's piece. It's just a piece of Stop the War Coalition orthodoxy. But I feel nauseous when I see something suggesting that standing by and allowing slaughter to happen is the way in which we can "live in a world free from war."
Posted by The Plump at 2:57 pm No comments:

Many of the tragedies of Irish history have been the result of an English political conflict being fought out in Ireland. Other than the UK, the country most affected by Brexit is the Republic of Ireland. It was hardly mentioned during the referendum campaign. This imperial amnesia covered an inconvenient truth. Thirty years of violence and thousands of deaths later, a classic political compromise was embodied in the signing of the Good Friday Agreement. It has held the peace in Northern Ireland for twenty years, despite the lingering residue of the "Troubles." Maintaining the Agreement makes a hard Brexit impossible.

This week Daniel Hannan, Owen Patterson, and Kate Hoey all used the deadlock in the Stormont power sharing talks to make claims about how the Agreement has failed and needed revisiting. They are all hard Brexit ultras. It's a classic ploy. People will respond by offering justifications and explaining why it isn't true and that the Agreement has been a success. By doing so, they will have validated the idea that there is a debate about its utility and put the possible revision of the Agreement on the agenda. That has to happen if the ultras are to get their hard Brexit.

The conclusion that should be drawn is not about the Agreement. It is that those three ultras are not politicians, but zealots. It appears that there is no price that they are willing to let other people pay to achieve their benighted goal. Theirs is the irresponsibility of the fanatic.

Imposing the baleful consequences of English nationalism on Ireland is something Ireland does not need or deserve. This must be resisted and condemned from all sides.
Posted by The Plump at 2:21 pm No comments: 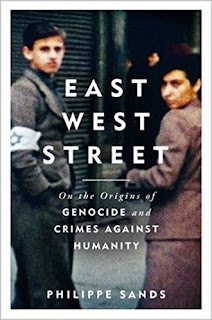 That's the only word that fits. It's gripping, engaging - and about international law. That might seem incongruous, but Sands wove what could have been a dry academic narrative around stories of the people involved, together with the discovery of his own family history. It's a brilliant device for making non-fiction accessible.

The biographical approach works because of a coincidence. There are four main protagonists. The first three, Leon Buchholz, Sands' grandfather, Hersch Lauterpacht, a professor of international law who established the concept of crimes against humanity, and Rafael Lemkin, who coined the term genocide, all came from the city that is now known as Lviv, in the Ukraine. The fourth, Hans Frank, was also a lawyer, but was the Nazi governor who administered the Holocaust in Poland. Buchholz, Lauterpacht, and Lemkin all managed to get out in time before Frank murdered their families.

The book focuses on the development of two related but conflicting legal ideas, crimes against humanity - committed against individuals - and genocide - committed against groups. However, both shared a central principle, that state sovereignty should no longer be unlimited and that the leaders of states should be held accountable for their crimes.

This raised the question as to how sovereignty was to be limited?  Rather than invent some powerful supra-national body, the answer was more ingenious. State sovereignty was to be pooled for a specific purpose, the administration of international law and the protection of citizens against abuses by their own state. The result was the Nuremberg war crimes tribunal. The limitation of sovereignty protected citizens. Ordinary people gained at the expense of their governments. The Holocaust made it a humanitarian imperative. And though it took decades for the International Criminal Court to be set up, the principle had been established.

The nature and extent of the war asked profound questions about the shape of a post-war settlement. In the first half of the twentieth century the sovereign nation state brought an era of catastrophe that culminated in the Nazi war of extermination. The system based on the balance of power broke down, collective security through the League of Nations failed, while the self-determination of nations brought intractable ethnic conflict rather than peace. Nuremberg pointed to a different approach, the voluntary pooling of sovereignty where the gains were greater than the losses. Which brings me round to the single most important question facing Britain today, Brexit.

The European Union is an evolving response to the dangers of nationalism. Membership involves states pooling sovereignty in limited areas, whist retaining it overall. Describing the EU as bureaucratic misses the point, it's more accurate to describe it as legalistic. It's existence and operation is based on law, made through collective decision making processes, involving all members and embodied in treaties. By requiring democratic governance and tying it to economic self-interest, it has been the most successful of our trans-national institutions. Which is why nationalists, fascists, and revanchist neo-imperialists (such as Putin's Russia) bitterly oppose it. And in Britain they struck gold.

The narrow result of an unnecessary, poorly constructed and appallingly conducted referendum is now being interpreted in the most radical way possible. Each compromise, even the ones the Leave campaign actually advocated themselves, is treated as an act of treachery. The language is of ultra-nationalism, the very force that brought ruin to Europe. As the realities hit, any economic case for Brexit is melting away, while the huge costs of the increase in bureaucracy and new infrastructure necessary to deal with the consequences of leaving show this to be an expensive folly. The result is that nationalist rhetoric has become the first resort of the Brexiters. Given, that the heart of the European catastrophe was the Holocaust, it is both alarming and unsurprising that this rhetoric involves stepping into the sewer to drag out noisome anti-Semitic conspiracy theories about George Soros as the Jewish "puppet master" secretly plotting to sabotage Brexit. The echoes of an evil past are unmistakable.

As it all becomes about "taking back control" we have to ask the question, 'control for whom'? I can assure you that it isn't control for you or I. It's not for ordinary citizens; we will lose rights, freedoms, and protections. No, the liberty they talk about is for the government to act without restraint. This gets lost amongst all the welter of detail, as does the broader historical significance.

Reading Sands' book brings you back to a sense of national pride that Britain played a role in establishing the principle that national leaders were not immune from prosecution for the crimes that they have committed against their people. It reminds us that unlimited state sovereignty is not an untrammelled good. It tells us again that nationalism and genocide walked hand in hand throughout European history. And it shows that Holocaust remembrance is not just about pious statements, but the need to build institutions that prevent it from happening again, and never taking them for granted.

If there is one compensation it is that Brexit appears to have strengthened rather than weakened the European Union. It still faces challenges within from Hungary and Poland, together with the extreme nationalism of the far right. However, The EU's economy is growing and it is becoming more and more apparent that the big loser will be Britain alone. Even so, the challenge to the delicate balance of the post-war settlement is disturbing. It is a triumph for the nationalist right, even if some left-wingers think that they can combine nationalism and socialism without the terrible consequences of the previous attempt. And it is Britain, my country, that has delivered the most damaging blow to post-war European institutions.

There has been much noise and resentment amongst Brexiters that we are not celebrating our exit from the EU. They witter on about Big Ben ringing and special stamps issued to commemorate our departure. I find their facile suggestions contemptible. If, and I really hope the day never comes, Britain leaves the EU, it will not be a moment to mark with rejoicing. Instead, it will be a day that signals our betrayal of the attempt to create a new Europe out of the ruins of the old, to establish the protection of citizens through international law, and a reversion to an historical fantasy of British exceptionalism. It will be a day of shame; deep, deep shame.
Posted by The Plump at 4:00 pm 2 comments: