I've been travelling, returning to the UK, staying with family in London, and am back in Manchester doing useful things. That's why I have been quiet on here.

Yesterday was a soggy, chill day. Rain poured from leaden skies, and the Tory Party Conference came to town. The security arrangements around the venue were ridiculous. The Midland Hotel was fenced off with secure turnstiles for the guests installed. Still, conference delegates roamed freely and incongruously, showing that they were from a different tribe. And there were demonstrations. The biggest was the anti-Brexit one in the afternoon. It wasn't huge, unsurprising given the weather, but it was several thousand strong and attracted people from across the region. These people made me nostalgic for my Hull days. 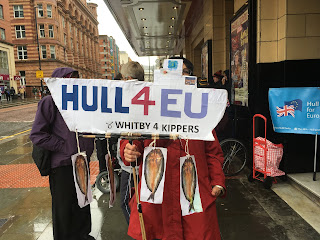 The rest followed the usual pattern of chants and banners, subdued a little by the rain, 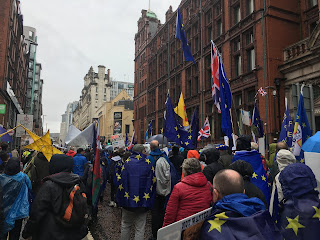 and the marchers were cheered on from a fine traditional pub. 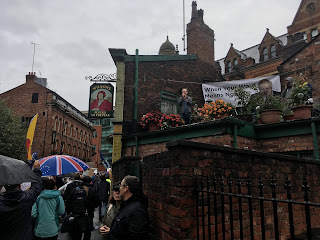 There was a counter demonstration of Brexit supporters. I counted no more than a dozen. There were a few choruses of "we love you Boris, we do" from disturbing looking thugs. (Johnson should worry about the people he is attracting.) A few were drunk and trying to pick a fight with the police, a couple of them shouted "scum" at the demonstrators, but long before the end of the march had passed, they had all gone home. I think that sums up the respective strengths of the pro and anti Brexit movements.

But the most striking thing about the day was the many more thousands who were in the city centre, doing their shopping, having a day out, eating and drinking, going to theatres and cinemas, etc. They weren't fussed. Most smiled warmly at the marchers, there were a couple of sarky comments, but that was it. It's best summed up by someone on the tram who asked me what was going on in town. He hadn't a clue. I told him it was the Tory Party conference. He said, "Oh bloody hell. Them." And that was it. The referendum was launched into a sea of indifference about the EU, and it's still there. The excitement about polarisation, such as in this good piece, is right about the committed. Neither diehard remainers or leavers are a majority, however. Both rely on the cognitive bias of the false consensus to comfort them. Because they believe in it, they think they must be in the majority.

The evidence does show that remain is the stronger. It can mobilise many, many more people than leave. You would be much happier to meet them in a dark alley too, even if they might get a bit boring in the pub. There hasn't been a single opinion poll without a remain lead for two years. The generational aspect is hugely important as well. The young are overwhelmingly pro-remain - 70-80% - leave doesn't have much of a future.

All this makes the talk of civil disorder even more ridiculous. Not only would this be the first time in history that people have rioted in favour of food shortages, it is always the young that riot and they don't want Brexit at all. But it's the great indifference that is the key point. The electorate didn't know much about the EU, never saw it as a problem, and didn't realise that it made their lives easier even though they talked about retiring to Spain and going on a "booze cruise" to bring back car loads of cheap drink. If we don't leave, a few hundred neo-fascists may be as unpleasant as always. Elderly Brexit Party members will mutter dark threats. But I reckon most people will either shrug or breathe a sigh of relief, because the only way that it will all be over is to remain.

"Getting Brexit done" (entering ten years of complex negotiations with the EU to try and work out a worse relationship while mitigating as much of the damage as possible, all of which will dominate the work of government) is not the magic formula for social peace. Brexit was sold as something that brings material benefits and an enhanced national status. Instead, it is bringing material costs and a diminution of national status. Voters will not forgive the politicians who took us out and many leave voters will forget that they once supported the idea. The younger generation, wanting to exploit the opportunities that the EU opens up, will be bitterest of all.

The language has been terrible, the threats shocking, and the atmosphere poisonous. There's a simple reason why - Brexit is dead and Brexiters are losing. No amount of shouting fictions at reality makes it any less real. They can't answer questions about trade, production, rights, prosperity, transport, and a myriad of other questions because the answers are either unknown or unpalatable. So, they scream abuse at the people who ask them. As they do, and as they try and excuse the actions of the lousy choice the Tories made for leader, they look worse and worse to those who don't share their passions.

I don't know how this will play out, but I think that there is a fair chance that we will end up not leaving. It's the easiest way out of a self-imposed mess. Anyway, my humble suggestion is that the next time we try and wreck the country, let's not do it over something most people never cared about in the first place.
Posted by The Plump at 4:24 pm No comments: