I attended a lecture many years ago by David Denver from the University of Lancaster. He was unique amongst academics as he combined being a professor with running the bar. He was the only person I can remember who could entertain an audience by talking about voting behaviour. This was in the early 80s and he was discussing the 1979 referendum on Scottish devolution. He told a story about interviews he did with voters. He spoke to an elderly woman.

I stole that line for my own classes for the next twenty years. It's a great story to make students laugh, but it illustrates a serious point. A yes/no referendum tells you nothing about the strength of the views held by a voter. A vote by the absolutely convinced carries the same weight as someone who is wavering and unsure. And the wavering voter could just have easily voted the other way. This matters if the vote is close, which is why there are usually safeguards built into referendums. In 1979 just under 52% voted in favour of devolution, just over 48% were against. The referendum was lost as you needed a majority of the vote and the support of 40% of the registered electorate to win. They only got 33%. It made sense, even if the loss of the referendum brought down the Callaghan government. If this precedent had been followed for this year's referendum on the single most important constitutional decision this country has taken for more than forty years, we would not now be negotiating to leave the European Union. The majority was similar, however although the turnout was larger than in 1979, leave only gained the support of 37% of the electorate. I have no idea why the rule was not applied this time, other than shoddy thinking about the principles of democracy and complacency about the result.

Yes/no questions also fail to tell you anything about why people voted as they did, and are totally inadequate if the options are not a straightforward yes or no. In the Euro referendum the consequence of a remain vote was simple, no change. But the leave campaign kept offering different options with no method of knowing which one you were voting for.

As a result, I cringe when I hear politicians talk about the 'clear' result, and the 'will of the people,' the result was nothing of the sort. It was a very narrow majority, as this bar chart from Political Betting shows. 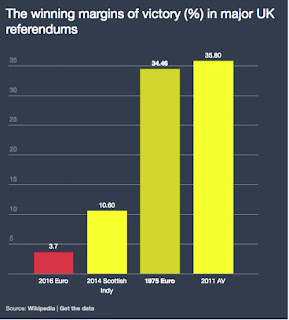 As the accompanying post by Mike Smithson points out, a swing of just 1.8% would have reversed the result.

That leave won by the rules set before the referendum is incontrovertible. Whether it is a secure basis for popular support for such a monumental reversal of policy is doubtful. Of course, it shows equally that the overall support for the EU is weak, yet this result is being claimed by the May government as the ultimate mandate for anything regressive that they want to do. The interpretation that the government has put on it is that it was permission to pursue a right-wing nationalist agenda. It's a clear case of mandate creep. This is why I found this article by Daniel Hannan in the Financial Times so interesting.

Hannan is a right libertarian and an obsessive about the European Union. There is a good long profile of him here. Now, at the moment of his triumph, he is getting worried. He makes two good points, but smooths over the obvious objections.

The first is that the primary motive of most who supported leave was not to stop immigration. He objects to all leave voters being labelled racists. So do I. They aren't. The result is that he is horrified to see the government make immigration control their overriding priority in Brexit negotiations. However, though the majority may not have been motivated by xenophobia, the referendum would probably not have been won without strident anti-immigration rhetoric. And if you think that you can hitch a ride with Farage and not get his politics, then you have deluded yourself.

Secondly, he recognises that this was not a clear result.


A 52-48 split, it seems to me, is a mandate for a gradual and phased repatriation of power, not for a severing of all institutional links with the EU. Britain should withdraw from the structures of political union while retaining some of the current economic arrangements, including the prohibition on discrimination against the products of another EU state, which is the true basis of the single market.

The obvious objection is that "a gradual and phased repatriation of power" was not on offer from the EU. All that was available was withdrawal and they never seriously thought that anybody would want to do that. The now familiar Article 50 was never expected to be used. In negotiating the future relationship between Britain and the EU, the cards are not in Britain's hand. I am afraid that by his logic an inconclusive result points to one conclusion only, to remain until such time as the case for leaving has been made decisively. And Hannan, a classic liberal, is concerned.


... if we insist on seeing the referendum as a vote for nativism and protectionism, we shall lose that opportunity. Worse, we might truly become the meaner country that pro-Europeans kept talking about during the campaign.

The complexity of reality is beginning to make itself known after the over-simplification of the referendum. In the same way, the inadequacy of referendums as democratic devices are being exposed. Looking at the hard economic data is scary. (And with part of my life lived in Greece, I am distinctly unimpressed with the falling value of the pound). At the very least, the risks are huge. The costs, as always, will be borne by those least able to bear them.

I listened to David Davis, the Brexit secretary, speaking in the Commons. He talked about wanting the "most open, barrier-free access to the single market possible." Of course that is what we have now, it's called membership. Without membership, who knows? I couldn't help thinking that Theresa May has just turned on a giant fan. At the other end of the room is a vast pile of stinking ordure, made up of the difficulties, contradictions, threats, and unpleasantnesses associated with Brexit. It is sitting on a slow moving conveyor belt, getting ever closer. All that stands between it and the fan is a giant, invisible wall of wishful thinking. This could get messy.
Posted by The Plump at 5:12 pm No comments:

This is getting silly.


Leading foreign academics acting as expert advisers to the UK government have been told they will not be asked to contribute to any government analysis and reports on Brexit because they are not British nationals.

Utterly bizarre.
Posted by The Plump at 3:02 pm 2 comments:

Ian Dunt is getting increasingly despairing, and he's right. He stresses the need to keep fighting.


If there is any hope it is with those who are still prepared to speak the things which are in front of their eyes. People who are still prepared to say that losing tariff-free access to our biggest market is not wise, that putting investment at threat is to handicap our own prospects. People who will point out that a two year timetable to unravel four decades of law and create a substantial trade deal is not realistic. People who believe that by having open borders and an open society, Britain is stronger and more beautiful and more successful. People who believe that sabotaging Ireland and pushing away Scotland is not how one keeps the Union together. People who recognise that a 52% vote on a vague question is not a mandate for the most radical possible interpretation of a referendum result.

The next few years will see uncertainty and British isolationism start to cause demonstrable harm to the economy. Those who recognise the insanity of our current path must keep making that point and avoid the deterministic piety of those who demand we ‘get over it’. It’s by making the case for reason, liberalism and internationalism that we can best influence the debate when the repercussions of our current foolishness become impossible for even the Brexiters to ignore.

At the moment all I hear is silence.

In his latest piece, Dunt is, at least partially, right again. The Tories have become UKIP.


The policy is clear. Theresa May confirmed on Sunday that she would pursue a hard Brexit and pull Britain out the single market. What even 12 months ago would have been considered economically insane is now a cosy consensus. Her policy actually goes further than that which Nigel Farage's allies once held in the past.

That a narrow majority in the referendum, delivered by a minority of the electorate, can be taken as a mandate for pursuing what in itself was the minority position in the leave camp shows the democratic deficiency in the use of referendums. As this article makes clear, it isn't a problem confined to the UK.

I can add little more to previous posts. The referendum has delivered a comprehensive victory for the right who are wasting no time in consolidating their power in the absence of any coherent opposition. Beyond Brexit, the Tories' grab for the economic centre ground is an attempt at realignment around nationalist conservatism. Economically, it's closer to Heath than Thatcher, and is a long way from UKIP. But it's also allied with insular nationalism and social conservatism, which the Tory left have always rejected. It has strong appeal, though nemesis always lurks as the reward for hubris, and there are three factors in the Brexit drama lurking offstage waiting to play their part; constitutional, economic, and generational.

Scotland is determined to remain in the EU and voted to do so. In Northern Ireland, the leave vote effectively abrogated the Good Friday Agreement. Northern Ireland voted to remain in the EU. The Agreement had been overwhelmingly approved in referendums held both sides of the border. English voters alone have put it at risk. The contradictions are obvious.

Though the outcome is uncertain, there are huge risks to inward investment and exports, in both goods and services, if we leave the single market. The process of Brexit itself promises to be phenomenally expensive. There is little doubt that we will become poorer as a nation. What effect will that have?

Finally, the young voted overwhelmingly to remain. They are the future. In the longer term, will they fall into line with the new dispensation? It is possible. But it is also possible that a new political generation will reject national conservatism, and that it will merely be a brief interregnum for troubled times. That is also where hope lies.
Posted by The Plump at 3:26 pm 3 comments: