In a right state

Brexiteers tend to make a fetish of the nation state as an alternative to the European Union. They see it as the source of popular sovereignty and thus the purest expression of democracy. The remain campaign focused on economic consequences, rather than principles of sovereignty. This has fed a mutual misunderstanding.

The nation state has not always been with us. The ideal of the autonomous, sovereign state stems from the Peace of Westphalia in 1648. The idea that the source of sovereignty is the will of the people came afterwards, mainly through the American and French Revolutions at the end of the eighteenth century. The idea of ethnic nationalism, that the nation is composed of specific peoples, came later still, giving rise to the advocacy of the self-determination of nations from the nineteenth century onwards.

The problem is that nation states have a dual nature. They have successfully built democracies, liberated oppressed peoples, and grown prosperity. However they have also turned long existing populations into ethnic minorities and persecuted them relentlessly. They have harboured expansionist ambitions and launched wars of conquest. They have been grotesquely corrupt tyrannies, and, if R. J. Rummel is correct, nation states have killed 262 million of their own citizens in the twentieth century alone. Yes, 262 million. And we moan about a few regulations about health and safety and agricultural subsidies. Nationalism may have given us Tom Paine, but it has also produced Adolf Hitler. Controlling the nation state has been as much a problem in the nineteenth and twentieth centuries as has been promoting national self-determination.

This is where the European Union comes in. The nation state is one of four broad historic models of rule: localism, nationalism, federalism, and imperialism. Localised bodies, such as city-states or autonomous regions, were absorbed into large Empires with centralised authority. This conquest and suppression was resisted with the idea of the sovereign nation state. It became a weapon of liberation. It offered rights and independence to peoples, freeing them from the domination of imperial control, but with it came the need to control the darker aspects of nationhood. One of the answers was federalism.

The term federalism is used in two senses. First, as a system of localised power within larger states, achieved through devolution and limitations on the rights of the central authority, balancing local autonomy with central power. Secondly, it can refer to a voluntary arrangement between states to share sovereignty for specific and limited purposes. The EU is the latter.

When I read advocates of Brexit, I find it hard to pin down their definition of what the EU actually is. Pure nationalists reject federalism as a concept in favour of national sovereignty, but the rhetoric of others confuses federalism with empire. The picture they paint is of Britain reclaiming independence ("taking back control") from an empire into whose grip we have fallen.

There are three ways in which they see the UK as subjected to imperial control.

1. Economics. This is the main argument of the left Brexiteers. The EU is a way of enforcing neo-liberal economics on European nation states. It's a bit of a truism. Of course the economics of the EU are the same as the mainstream everywhere else. There is a consensus after all. It doesn't mean that the consensus can't or won't change and the EU's economic policies with it, despite treaty commitments. For the life of me, I can't conceive of how a social democratic paradise can be achieved by a political settlement outside the Union drawn up by the right wing of the Conservative Party.

2. Bureaucracy. Ah, the faceless bureaucrats of Brussels. Let's escape from their grasp and place ourselves in the hands of our own faceless bureaucrats from Whitehall. This critique confuses administration with representation. Representation is the business of politics. Administration is always in the hands of the unelected. That there are weaknesses in democratic representation is undeniable, so too are there bureaucratic rigidities. It would be impossible to coordinate and harmonise rules over twenty-eight member states without consistency to the point of obduracy. Otherwise everything would be down to the will of the most powerful members. It can make the EU's institutions cumbersome and inflexible, but are their administrative systems any more burdensome than our own?

3. 'Rule by Brussels.' This is the most common way in which the EU is spoken of as an imperial power rather than a voluntary federation. The pooling of sovereignty, conflicting national interests, opposing national democratic mandates, and the differential sizes and strengths of the member states, all cause concerns about a 'democratic deficit.' Executive decisions are taken at a stage removed from elected representatives. The important bit that Brexiteers tend to ignore is our role in the process. We are one of the big three powerful states and key decision makers. If Brussels is an empire, then we are one of the imperialists and not its subjects. Or at least we were. We have given our position away.

I think that the view of the EU as something approaching an alien Empire is hopelessly overblown. There may be a tension over the scale of European integration, but so far the UK preference for a looser model has prevailed. However, if someone who views the EU as a federation debates with someone else who sees it as an empire, there is no possible point of agreement.

Leaving the EU is a nationalist project. Even if it does not see the EU as an empire, it prioritises national sovereignty over the compromises necessary to create federal structures. But what sort of nationalism? The nationalism of Brexit is more prosaic than the anti-EU ambitions of the European far right. The British national narrative is about resisting continental tyranny, not embracing it, but I still have worries.

The European Union was founded as a direct consequence of the second of two catastrophic breakdowns of the European state system in the twentieth century. The balance of power - restraint through deterrence - had failed, as had collective security through the League of Nations. Instead a slowly developing federalism was put in place to bring peace to Europe. It sought to restrain national ambitions by building a union of independent states committed to democracy, joined together through free trade and economic self-interest, and by establishing a continent-wide framework of law and citizens' rights. That is what we are leaving.

Nationalism is a potent force and lies in wait for any failure of legitimacy, yet we can't overestimate the importance of national self-determination as a form of liberation. However nationalists in Scotland and Catalonia for example, can see their self-determination taking place within a broader federation. Leaving the UK or Spain need not mean leaving the European Union. In fact, it makes independence more possible. No, the nationalism that rejects the EU comes from the right. There is a good reason for this. The EU was conceived and developed in order to foil the ambitions of the nationalist right that had nearly destroyed the continent. The far right seeks to weaken the EU precisely for that reason, to remove a formidable obstacle to seizing power.

It seems folly to abandon something so recent, especially given its successes as well as the inevitable failures of human institutions. But doesn't the referendum vote show that the legitimacy of the EU is weak, being rejected by just over half the people who voted? I don't think so. The vote was complicated with sharp regional and class differences, but the consistent divide is between the young and the old. According to NatCen's research, even amongst the working class, where voting leave was strong, young voters split 61% to 39% in favour of remaining. Britain was voted out by a coalition of the elderly poor and the elderly affluent. They had different motives, but shared a folk memory of a better past. They, like me, remember the days before we joined what was then the EEC. The right wing press have assailed all generations with a stream of negativity about the EU, but it seems to have made little difference to younger people. Europe has always been part of their lives. They like the freedom to travel and work that it offers. They are less concerned with immigration and more receptive to change. They wanted to remain.

I can't help thinking that the old voted for a future they will not see against the wishes of the young who will have to live in it. It's a future based on a past the young neither share nor value. Their memories are shorter and the issue of sovereignty is far less pressing to young people who see it as limiting rather than liberating. Time passes, and as it does people die and younger people come of age. By the time we actually do leave the EU the narrow majority of those who voted, already a minority of the whole electorate, will have vanished. It probably has already. Our departure will be arranged by politicians who are opposed to leaving, but who feel bound to a referendum result that would no longer command a majority. Despite the rhetoric about 'the will of the people' our departure will almost certainly be against the wishes of the majority.

The referendum result is merely a quirk of timing. We have an ageing population and it was called as the shocks of the financial crash are still shaking our societies and economies. Calling it for no other reason than managing conflict in the Conservative Party was an act of gross irresponsibility.

We do not know what will happen. Much does depend on how the drama of economic crisis and resurgent populism plays out. My suspicion is that not much in Britain will, other than a long, slow decline. It will be something that we will muddle through. There will be a sharp economic shock in the short term and we will become poorer, but still cling to our illusions of greatness. Our hubris will mask the nemesis of the slow erosion of our power as we linger outside the prosperity of a growing Europe.

Much depends on how we disengage. If the Europe Union collapses in the wake of serial crises, then leaving may be prescient. However, I doubt if that will be the case. It's more likely that the Westphalian state has had its day. The global constraints of trade, markets, and ecology offer little scope for sovereignty outside the power blocks and markets of international organisations. A solitary country has only a weak hand to play. We have changed from being a power broker to being a supplicant.

And in our worship of the nation state, we are trying to live in a past that has gone and celebrating a political institution that has only had mixed results, the worst of which have been murderously dire. Surely given European history, we should be looking for something beyond the nation state to resolve the problems and paradoxes of our continent. However fumbling and clumsy, the European Union was offering just that – the flourishing of nations within the shared strength and guaranteed liberties of a limited federal structure. Who knows if European federalism is the answer? But to abandon the experiment this early in its history seems premature and foolhardy. 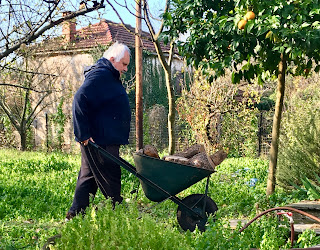 Deep thoughts on the issues of the day coming when I've sobered up.
Posted by The Plump at 11:03 am 3 comments: