Though this be madness ...

I am back in Greece. The rain has poured down. The news gets more curious by the day. Let's get this right. It began with the exposure of basic and serious errors in one of the intellectual foundations of debt reduction through austerity and then was followed by the IMF's mea culpa about getting serious elements of the policy wrong. The EU and the ECB dispute this and everybody keeps on doing the same thing. The Greek government, desperate to find more cuts, closes down ERT (the Greek public broadcaster, the equivalent of the BBC) immediately, promising to open up a new organisation later in the year. There is a general strike in response (yes, another one) and the Horton Village Choir join the protests by singing "Over the Rainbow" outside the ERT radio offices in Volos.

If you are looking for sanity, the Horton Village Choir are probably your best bet - idiosyncratic sanity, but sane none the less. As for the rest ... pass. 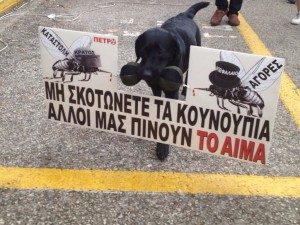