Seventeen British men arrested for wearing nuns' habits and accused of offensive behaviour been freed by a court on the Greek island of Crete. 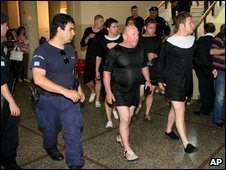 The men, who were also wearing women's lingerie, spent a night in police cells in Crete wearing their outfits.

If only the authorities had known cross-dressing is an old British disorderly tradition.

Mind you, they should have said they were weather forecasters.