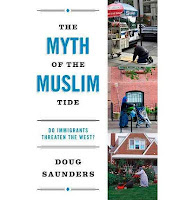 This book looks interesting, one for my post-writing reading list. I have been troubled by the way in which a legitimate concern over jihadi movements has morphed into a general intellectual incoherence. Parts of the left have embraced an apologism for some unspeakable theocratic monsters for fear of being 'Islamophobic', whilst the far right has mobilised into 'football hooligans against Muslims'.  As for the rest, either an embarrassed and faintly patronising silence reigns or the attention rightly paid to Islamist organisations crowds out a broader anti-racism. This book seems to take the sensible line of looking at Muslim immigration in the context of the usual patterns of migration and assimilation, using good empirical evidence and discussing the external political pressures that they are facing.

I suppose it particularly struck home as I am currently re-reading the anarchist Rudolph Rocker's memoir, The London Years, about the organisation of Jewish immigrant labour, which also took place at a time of terrorism, or 'outrage' as it was then known. This was again associated in the popular imagination with foreign immigrants and agitators. History never provides exact parallells, but there are echoes of today's moral panics and political confusions to be found in the sweatshops of19th century London.

Here is a short video of the author discussing it.

And a review from Terry Glavin here.
Posted by The Plump at 9:50 am