Simon Tisdall has identified those responsible for the awful murders in Benghazi. No surprises for guessing where the blame lies;


... responsibility may also be traced back, directly or indirectly, to those in London, Paris, Brussels and Washington who launched last year's Nato intervention in Libya with insouciant disregard for the consequences.

(The same way as those who criticised the support for the revolution had "insouciant disregard" for the consequences of not intervening? Just saying ...)

The whole article can be boiled down to two points:

1. Don't be fooled by any of the things that have gone right, only look at the remaining problems because I feel relieved and happy that we are doomed after all.

2. If we had let Gaddafi slaughter them all (and a few tens of thousands of others) and reestablish his kleptocratic reign of terror, they wouldn't have been around to kill US embassy staff. Wouldn't that have been nice?

Oh well, it's the Guardian after all ...

In the meantime, here are some others who chorus 'not in our name.' 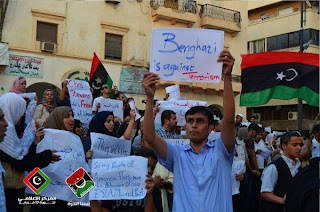 A much more interesting piece of analysis from Hisham Matar here.
Posted by The Plump at 1:38 pm

Thank you for the link to the Hisham Matar article.