It's time for some good news.

That's what it felt like as Swinton contested the first iPro Sports Cup Final for League 1 Rugby League clubs. 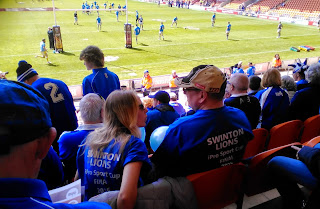 We lost, but there was a great turnout of Swinton fans with banners and balloons. We kicked up one hell of a racket. And it felt really good. The sun shone and the sky was dressed in Swinton colours. You could sense that at last this great old club is reviving. It is run soundly now, with a new company and fan representation on the board. There is an active supporters' trust. It's a club we can all get behind. After more than two decades of homelessness, everyone knows that we need a ground back in Swinton. If that happens the future is bright - bright blue.

Flowering - fans demanding the impossible and getting it.

FC United of Manchester, a non-league club created and owned by its fans, born out of despair, formally opens its new stadium with a friendly - against Benfica! David Conn, the best writer on football, has written a lovely piece on the club. It concludes beautifully:


At the trial game one supporter, Michelle Noonan, called over to Brown. “I can’t stop crying,” she said. Asked why, she was quiet for a while. Then she replied: “Because I can’t believe that out of so much anger and hatred we have made something so good.”

I have lived for many years in Manchester where I discovered Rugby League and Swinton. I also watched football and went to see Manchester United, mainly sporadically, though I did have a season ticket for a few years before giving it up with a sense of growing disgust. The economics of it offended me, but it was the way supporters were both exploited and patronised, treated as cash cows to be berated if they tried to complain, that meant that the relationship could not be a happy one. The crass commercialism and "global brand exploitation" had turned something romantic into something ugly. The Glazers' takeover and financial dealings would have seen me off completely, but I had gone before then. I could have been tempted by FC United, but it wasn't in my heart.

As I have blogged before, I grew up in South London and I fell in love with Crystal Palace early in life. I knew I had to go back. I was returning home - to Palace - to first love. The experience was intense.

It felt more ethical too as Palace were in the Championship, but just as I started going they won the play-offs against the odds and were promoted to a place amongst the plutocrats. Remarkably, they have stayed there and this season finished tenth. Yesterday, they honoured one of their longest serving players, the Argentinian goalkeeper, Julian Speroni with a testimonial. Speroni donated all the receipts to charity. Dominic Fifield wrote a smashing profile of the man and summed up the Palace experience totally:


Speroni often ends up pinching himself when he contemplates the journey he has made from Saavedra, Buenos Aires to the Premier League via Dundee. Or, putting the geography to one side, to mid-table in the most watched league in world football via one relegation, a painful administration and 11 different managers – permanent, interim or caretaker – at Palace alone.

But things have changed since that administration five years ago, and whilst the way FC United is run may be the ideal model, Palace is the next best thing. There is a supporters' trust, though it's not part of the ownership structure. But the consortium that took the club out of administration is led by a lifelong fan. He talks emotionally about his first match here, a game I was at too and remember well. He runs the club, but does not take a salary. It appears that the temptation of an American takeover has been resisted. The club is debt free, profitable, sustainable and determined to stay that way. The rapport with the fans, including the lunatics in the Holmesdale End, is excellent and watching Palace is a boisterous, noisy experience. It feels great to be back, even if distance restricts the times I can go to see them.

Always save the best news until last.


Two criminal probes into corruption at football's governing body Fifa are under way, after seven senior officials were arrested in Zurich on US charges...

Prince Ali Bin al-Hussein of Jordan - Mr Blatter's rival for the Fifa presidency - described the arrests as "a sad day for football".

And while we raise our glasses, let's glance over our shoulders at other examples of the what the world can be - at Swinton, FC United and Crystal Palace - at all those fan run and owned clubs - at the German football model - all the while remembering that sport matters, it is part of our culture and history, and that another world is possible.
Posted by The Plump at 12:30 pm

As an East Stirlingshire fan I can connect with the best bits of this (we don't do plutocrats or corruption but we do enjoy a real sense of, often embattled, community.) It goes deep as my grandparents were season ticket holders in the 1950s and 1960s. I've never understood people supporting teams outwith their home town and despise those in central Scotland who do so for sectarian reasons.