When people ask me what I do when I am in Greece I usually reply that I have activity holidays. After all, sitting and looking are activities. As a result, it seemed appropriate that I should spend some of my time here reading this book, painfully slowly. 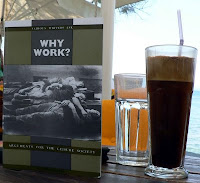 Why Work?, is a collection of essays put together by the late anarchist activist, Vernon Richards, and published by Freedom Press. Subtitled Arguments for the Leisure Society, it is an eclectic collection, including non-anarchist classics by Bertrand Russell and William Morris, together with some post-war pieces, mainly culled from the pages of Freedom. There are quite a few striking insights that are still relevant, but some of the material seems dated. This is not only because post-war assumptions about the growth of leisure have proved wide of the mark, but also because of a resurgence of the work ethic, not least in New Labour's approach to social welfare, resulting in the expression of a growing contempt for leisure.

Bertrand Russell remarked that, "the idea that the poor should have leisure has always been shocking to the rich" and there are many comments in the older essays about the idle wealthy living off the industrious poor. This is still the case, especially globally, where much luxury in the North is created in the sweatshops of the South. However, within the developed countries, for many of the better paid, idle privilege has been replaced by a pathological, macho, workaholic culture. Managers can work ferocious hours themselves, a sign of their social dysfunction, and also seek to impose them as the norm on the rest of us. Managers' hours are spent inventing more "useless toil" for us to do, thereby displacing "useful work" and driving too many people into exhaustion and ill health. The contempt for, and even fear of, leisure is widespread.

Much of the book is not spent on the discussion of leisure itself but on making work pleasurable and rewarding, after all it is unavoidable. Though this contrasts with my current need for pure indolence, there is a real issue here - the deeply destructive nature of boredom. The question of the problem of boredom is now being answered mainly through work alone, even including proposals for the extension of working lives long into retirement age. Other solutions have seemingly been abandoned. For example, adult education, which was widely seen once as a socially useful weapon against boredom, is now derided as 'leisure courses', with funding withdrawn from liberal adult education in favour of training for work.

Paid employment, for some people, may well be a way of staving off boredom and finding satisfaction and meaning in life. It can be part of a drive to achieve and succeed. For others it is the essence of tedium, carried out in a network of servile relationships, that only brings money. For those of us in the public sector, a belief in the core values of our work can give us the privilege of rewarding work and great pleasure. You can get too much of a good thing though. Everyone can get tired.

And so we are always thrown back onto the human need for rest and leisure and they should be seen as valuable and desirable rather than as manifestations of weakness. The fight for paid holidays was an integral part of working class struggles, just as the right to work was. We should celebrate leisure, have more holidays and invest in those who provide leisure for others. One person's fun is another's paid employment until it is their turn to escape. Yet how do we define what leisure is? There isn't an easy answer. Sitting and looking can be mind-numbing to some, whilst DIY fills me with horror. I suppose it is whatever gives us, as individuals, a sense of delight, pleasure and refreshment. And, at the moment, writing this post is doing just that for me.

The challenge of creating a society where the enjoyment of leisure is universal is a profoundly political one. It requires more than shifting social attitudes away from a driven, aspirational work ethic. The key to the ability to enjoy leisure is certainly the liberty to do so, but that liberty can only spring from economic security and that, in turn, raises profound questions of political economy. They will have to wait though. Now it is time for me to pull up a chair into the shade. After all, I'm busy.

Unknown said...
This comment has been removed by a blog administrator.
10:01 am

Let me be the judge of that.

clever spamming of your comments their your Gadgeness. The sneaky devils are getting better at it.

You might be busy Pete, but there was a rather nice, and very well attended, dinner to launch Wayne English's testimonial year last night. I've saved a copy of the brochure for you. Had a chance to watch The Fortune Cookie yet in your programme of work?

Nice review, G. I remember when the book first came out and one of the workerist/class-war anarchist magazines (can't remember if it was Black Flag, Direct Action or Cienfuegos Press Review) reviewed it under the headline "Why Bother?" There are indeed some slightly smug Tom Hodgkinson-style articles in there, from what I recall, but equally some very interesting pieces on the nature of work. And some lovely drawings by Clifford Harper, IIRC.

As someone who is currently unemployed Im looking for solid scholarly reasons why not to find a job. However you slate this book as being a bit out of date- any suggestions of something on the same subject but better and more contemporary?

I didn't know my Anarchism module could jack off.

Groans over. I write a post about indolence and you expect me to be arsed to look up a reference for you? :-)

Seriously, I haven't come across much new writing but that is because I am primarily an historian. Follow your instincts. You need no justification, especially a bloody scholarly one.