I was at Hilton Park this afternoon for Leigh's last Rugby League match there before moving to a new stadium. They lost an exciting

It is always a sentimental occasion when a ground closes. They are places holding many memories, but, let's face it, Hilton Park is now a crumbling dump. It also became hostile and unpleasant to visit for a while when the club went through hard times until the new board got hold of the club and rebuilt it. My favourite memory is of Swinton's unexpected Second Division Premiership semi-final win in 1989. All the Leigh fans shook our hands to congratulate us and offered to sell us their tickets for the final! The Leigh club were also great to Swinton when we found ourselves homeless and allowed us to play a few home games there. So good luck to them for a fine future, even if the powers-that-be have cast a shadow over their future prospects by abolishing automatic promotion.

It made me think of many of the atmospheric but basically awful grounds that have disappeared in recent years, all to be replaced with new, beautifully appointed stadia. Traditionalists moan about a lack of atmosphere nowadays, but my memories of the old grounds are not just of poor facilities and stinking toilets, but the fact that I often couldn't see a bloody thing. They all seemed to have shallow terracing, where my view would be ruined by the inevitable late arrival of a giant who would plonk himself in front of me.

However, for Swinton, the closure of our historic stadium, Station Road, in 1992 was a tragedy.

The fans were not given the opportunity to commemorate its loss as the sale was not announced until after the deal had been done and the season was over. That, and an ill-fated move to Bury FC, ripped the heart out of the club and a precipitate decline followed. There was no shiny new stadium for us, just promises that remained unfulfilled. Last year hopes were raised again, but now the air is thick with rumours of a move to Darwen in Lancashire. This would be the final blow for many fans.

A whole range of famous grounds have gone in recent years, Wigan's Central Park, Huddersfield's Fartown, Warrington's Wilderspool, Hull FC's Boulevard, are just some, with others to follow. More and more matches are now played at excellent venues. Those hankering after the good old days can now watch the celebrated documentary from 1980, Another Bloody Sunday, following Doncaster's attempt to avoid losing every game of the season, on You Tube. The opening footage is of their match against Swinton. Doncaster's old ground, the aptly named Tattersfield, is long gone. Here is the first part, it might just change their minds.

Incidentally, after many moves and crises, Doncaster now play here. 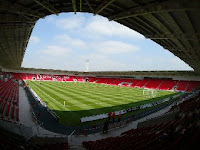 Maybe there is hope for Swinton after all. Maybe ...
Posted by The Plump at 9:26 pm

I think stadium design is continually moving on, so what was learned from the first wave of shiny new stadiums like the Galpharm and the JJB can be passed through into new stadiums. Of course there is the fact that these stadiums are also used for football to consider, it does make a difference as regards to things such as terracing areas.

I have memories from childhood of standing on the Knowsley Rd popular side watching the A team on freezing cold nights. Much prefer my pew at The Stoop, even if Quins RL are kicking us out of the Lexus Stand next season. The thing about RL is that it's never been afraid to challenge tradition, the whole game was effectively built on such an attitude.

Can't see why Swinton would be moved to Darwen, it's nice enough from memory, but there's nothing much there.

Nice to see Another Bloody Sunday again, hilairious and heartbreaking in equal measure.