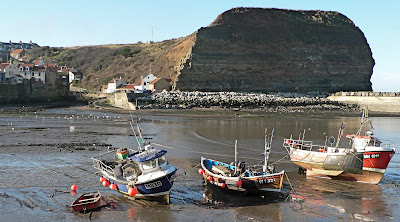 I am just back from a weekend away where there was no Internet and no signal for a mobile phone, cut off with only with a few friends from the Over the Hill Club (don't ask). The ten mile hikes are now replaced by gentle strolls and the alcohol consumption is down as age creeps up. 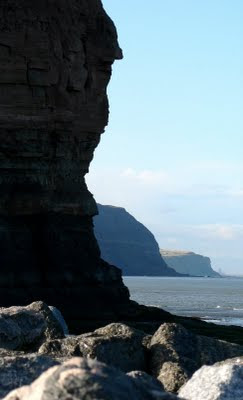 This time we were in Staithes, a North Yorkshire coastal village where the Arctic wind from the North Sea seems unrelenting. In November it is bleak with steep hills to climb and beautiful enough in a bleak and hilly way. The village itself is different, claustrophobic, wedged between two cliffs and divided by a ravine. In contrast to the wide sweep of the North York Moors it has the feel of the close fishing communities that lived there. And, since the end of the 19th Century it had played a role in the visual arts, hosting the Staithes Group or Northern Impressionists, the most notable of whom was Laura Knight. Now, inevitably, the village is dominated by holiday lets, though some life remains. It is the story of coastal communities as tourism develops and we rush to the sea for relaxation, which is exactly what I was doing this weekend.
Posted by The Plump at 2:06 pm

Thanks for the link to Laura Knight, a much under estimated artist. I read part of her autobiography where she describes her and new husband Harold's time in Staithes in the 1900s. Rough? It sounded awful, a real nightmare of drunks and domestic abuse. The Knights moved out partly because of the ever present danger of physical violence. It's a tourist trap now, but the coast line is beyond packaging protected by a 'bracing' climate.