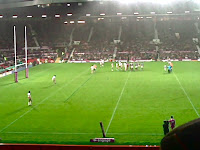 I was at Old Trafford for last night's Rugby League Grand Final, marking the end of the domestic season. The match was a cracker despite being played in a torrential downpour. It wasn't quite a sell-out, but nearly 69,000 people made the sort of deafening noise Manchester United would die for.

These are great occasions, fans mixing without problems, beer flowing freely and huge passions on display. They are not just events for the supporters of the competing clubs, but for all League fans to celebrate 'the greatest game'.
Posted by The Plump at 3:36 pm