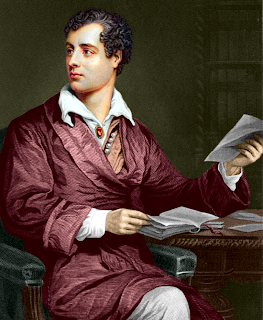 Maid of Athens, ere we part,
Give, oh give me back my heart!
Or, since that has left my breast,
Keep it now, and take the rest!
Hear my vow before I go,
Zoi mou sas agapo.

April 19th, the anniversary of Lord Byron's death, will now be a "day of celebration" in Greece. His action and death in the War of Independence makes him a national hero. His angry verse on the removal of the Parthenon Marbles by Lord Elgin is often quoted.

Byron's support for Greek independence from the Ottomans should not be solely interpreted as romanticism tinged with nostalgia for the Ancients. The nationalism of his day represented a popular challenge to the autocracy of traditional ruling classes and to the tyranny of empires. It is as one with his, admittedly aristocratic, radicalism, which was not confined to foreign causes. He spoke, too, for the English working classes, using his position to defend the Luddites.

So on April 19th, I think that we should join the Greeks and raise a glass in his memory. It might even be an idea to read some of the poetry.

As the Liberty lads o'er the sea
Bought their freedom, and cheaply, with blood,
So we, boys, we
Will die fighting, or live free,
And down with all kings but King Ludd!

When the web that we weave is complete,
And the shuttle exchanged for the sword,
We will fling the winding-sheet
O'er the despot at our feet,
And dye it deep in the gore he has pour'd.

Though black as his heart its hue,
Since his veins are corrupted to mud,
Yet this is the dew
Which the tree shall renew
Of Liberty, planted by Ludd!

Song for the Luddites (December 1816)

Part of the reason we're now living in Greece is Marilyn, my wife's adolescent romantic obsession with Byron and Greece. So have no worries on April 19 there'll be a Byron fiesta in our village kafeneio, to which of course you're invited!

You're making me jealous again Taylorakis.